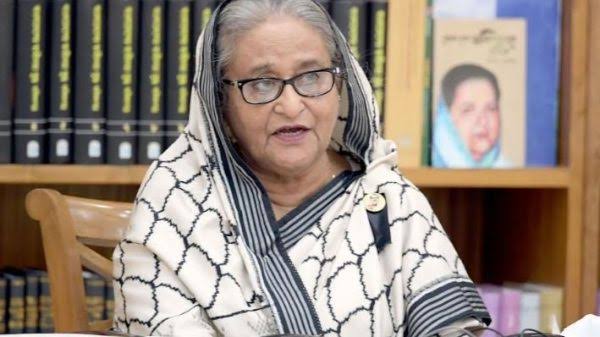 She virtually joined the award distribution ceremony as the chief guest from her official Ganabhaban residence here.

Ministry of Women and Cultural Affairs organised the function at the Osmani Memorial Auditorium in city as the office of the Deputy Commissioner, Gopalganj also remotely connected to it.

Each of the recipients got a medal made of 40gm of 18-carat gold, a cheque of Taka 4 lakh and a certificate of honour.

On behalf of the prime minister, State Minister for Women and Children Affairs Fazilatun Nessa Indira handed over the Padak introduced last year.

The premier also inaugurated handing over financial assistance and sewing machines among insolvent women across the country on Bangamata's birth anniversary.

She unveiled the cover of a book written by her titled "Sheikh Fazilatun Nesa Amar Maa” at the function as well.

With the state minister in the chair, Women and Cultural Affairs Secretary Md. Hasanuzzaman Kallol gave the address of welcome while eminent writer Anwara Syed Haq delivered the keynote speech.

On behalf of the Padak recipients, Syeda Zebunnesa Haque spoke at the ceremony expressing her feelings.

Bangamata was born on August 8 in 1930 at Tungipara village in Gopalganj. She was killed brutally along with Father of the Nation Bangabandhu Sheikh Mujibur Rahman and most of his family members on the fateful night of August 15 in 1975.

The birthday of Bangamata is being observed across the country in a befitting manner.

Alongside the government, various political and socio-cultural organisations have chalked out elaborate programmes that included discussions to observe the day. Wreaths were placed at her grave in the city's Banani area this morning.

State-owned Bangladesh Television and Bangladesh Betar in addition to other electronic media are broadcasting special programmes to mark the day.