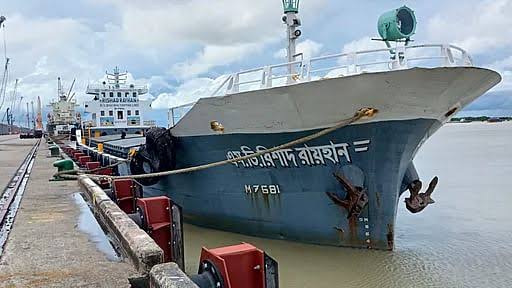 This is the first of the four trial cargo ships on this route.

The cargo ship is now waiting for a trial run on the Mongla-Tamabil and Mongla-Bibirbazar(in Cumilla) routes.

In October, 2018, a deal was signed between the two countries to transport goods through Chattogram and Mongla ports from India's northeastern states.

Unloading from the cargo ship began around 11 am. A truck was loaded with container and steel products which left for India around 12 pm. One of the containers will go to India's Meghalaya state through Tamabil while another will go to India's Assam through Bibirbazar border, said the port authority.

According to the port authority, an agreement and Standard Operating Procedures (SOP) regarding the use of Mongla Port for transportation of goods from India have been signed between the two countries.

The decision to conduct the trial run was taken after the 13th Bangladesh-India Joint Group of Customs (JGC) meeting held in March 2022.

Indian Assistant High Commissioner Indar Jeet Sagar said, "This initiative has been taken to speed up the trade using inland waterways on the India-Bangladesh protocol route. This agreement will have a more positive impact on the development of the economy and bilateral relations of the two countries. As per the agreement, the first trial cargo has been shipped to Mongla port today."