Homelessness is a curse that impacts people everywhere: PM 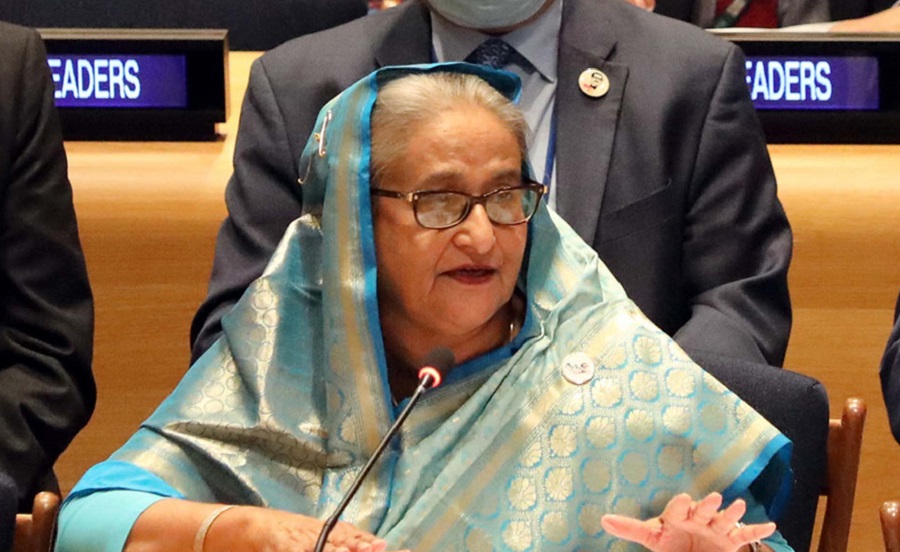 Prime Minister Sheikh Hasina on Wednesday said homelessness is indeed a curse and it affects people in both developing and developed countries.

“Our experience shows, it is within our capacity to do something about removing this curse. All our friends and stakeholders gathered here can forge a strong partnership to make that happen,” she said.

The prime minister said this while speaking at a high-level side event on Sustainable Housing held at her place of residence in New York.

She is now in New York to attend the 77th session of the UNGA.

PM Hasina said Bangladesh, being a densely populated country of 165 million people, could successfully manage the issue of homelessness.

“We’re providing the landless-homeless people houses with land free of cost,” she said, sharing her experiences of success in building sustainable houses for the underprivileged people across the country.

She mentioned that counting on the vision of the Father of the Nation, her government in 1997 launched a project named ‘Ashrayan’ that means housing for landless-homeless people. For the last two decades, the government has made the most sincere effort to ensure free of cost housing for all.

She mentioned that the coverage areas are not only the cities, rather it includes every village, town, district, island and hilly region of the country.

On the occasion of birth centenary of Bangabandhu Sheikh Mujibur Rahman, this effort is rejuvenated with bigger standings, she added.

Hasina cited that just in the last two years, the government has built 200,000 homes which accommodate nearly one million people.

During her premiership of eighteen years the government has accommodated 3.5 million homeless people in more than half a million houses. Construction of another 40 thousand houses is presently going on.

Under this project, each family is getting ownership of a brick-built house of 400-sq feet area with two-bedrooms, one long verandah, a kitchen and a sanitary latrine, she mentioned.

“We’re providing free electricity connections, safe drinking water to every household. We’re giving the house and the land with a sufficient homestead area free of cost, which is unique in the history of the world,” she went on.

“We are addressing the climate-victim families too. We’ve already accommodated 5,000 climate-refugee families in 139 multistoried buildings in Cox’s Bazar,” she said.

She said previously it was a common scenario in Bangladesh that homeless people used to flock to the cities in search of employment and dwelling. “But, since the introduction of the Ashrayan project, this trend has almost stopped,” she continued.

Hasina said these people are now self-employed in their own localities.

The government is following a model of `Inclusive Development.' The model ensures a holistic approach to make a rehabilitated person self-reliant and self-dignified with economic and social empowerment. The project ensures an equal share of ownership of the land and house for both husband and wife, she said.

The PM said the house is the most basic need of every citizen of the country and it creates opportunities for fulfilling other needs. “In Bangladesh, we have experienced that a home is not just a place to live. Housing security accelerates a person's economic emancipation and motivates them to live with dignity.”

Along with the provision of land and houses, the government has made successful arrangements in sending children to primary schools, she said.

Besides, she said that to deliver primary healthcare, connections have been made with the nearby community clinics. The children and women receive thirty types of medicines free of cost.

Homestead gardening, rearing poultry and fish production, including micro and small entrepreneurship activities led by women are in place. These interventions have made the initiative sustainable and eco-friendly, she added.

“We must support UN-HABITAT’s work in supporting countries to implement the Agenda. Bangladesh will remain engaged with the Group of Friends here in New York to bring these issues to the forefront. Let us keep working for a world where homelessness becomes a matter of the past.”