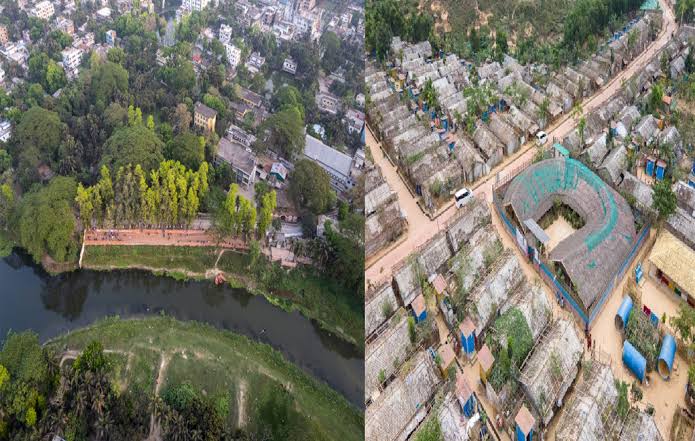 Two Bangladesh projects are amongst six winners of the 2022 Aga Khan Award for Architecture (AKAA).

The Urban River Spaces project in Jhenaidah created by Khondakar Hasibul Kabir and Suhailey Farzana, and the community spaces of the Rohingya Refugee Response programme by architects Rizvi Hassan, Khwaja Fatmi and Saad Ben Mostafa, will, together with four other winning projects, share the USD $1 million award, one of the largest in architecture.

Through consistent community participation and appropriation, extensive involvement of women and marginalised groups, and a local workforce, the seemingly simple undertaking of cleaning up the access to the Nabaganga river in Jhenaidah led to a thoughtful and minimal landscaping project with local materials and construction techniques, thus transforming a derelict informal dump site into an attractive and accessible multifunctional space that is valued by Jhenaidah’s diverse communities.

As such, the project managed to reverse the ecological degradation and health hazards of the river and its banks, and induce effective ecological improvement of the river, in one of the most riverine countries on earth.

The six temporary community spaces of the Rohingya Refugee Response programme provide a dignified, sensitive, and ingenious response to emergency needs related to the major influx of Rohingya refugees into Bangladeshi host communities, with particular attention to the safety of women and girls.

The concept and design of the six spaces are the result of appropriate planning, solid partnerships and inclusive processes involving the diverse refugee and host communities, such as defining spatial and functional needs.

In addition to the two Bangladesh projects from, Indonesia, Iran, Lebanon, and Senegal have also won the Award.

The AKAA was established in 1977 by His Highness the Aga Khan, to identify and encourage building concepts that successfully address the needs and aspirations of communities in which Muslims have a significant presence.

The Award’s selection process emphasises architecture that not only provides for people’s physical, social, and economic needs, but that also stimulates and responds to their cultural aspirations.

This year marks AKAA’s 45th anniversary. In a meeting in February 2022, an independent Master Jury shortlisted 20 projects from a pool of 463 projects nominated for the 15th Award Cycle (2020-2022).

Subsequently, after on-site reviews of the shortlist by a team of experts, the jury awarded six projects amongst them.

Ceremonies to honour the winning projects and mark the close of each triennial cycle are held in settings selected for their architectural and cultural importance to the Muslim world.

In 2022, the ceremony will be held in Muscat, Sultanate of Oman, in conjunction with the Aga Khan Music Awards ceremony.

Past winning projects in the country include the Bait Ur Rouf Mosque in Dhaka (designed by architect Marina Tabassum) and the Friendship Centre in Gaibandha (designed by architect Kashef Chowdhury) in 2016, the Grameen Bank Housing Programme, the National Assembly Building (1989), and a school in Rudrapur (2007). In addition to the above five winners, Bangladesh has had two other projects short-listed in the 2010 edition of the Awards.

The nine members of the independent Master Jury who selected the 20 shortlisted projects include Mr. Kazi Khaleed Ashraf, director-general of Bengal Institute for Architecture, Landscapes and Settlements, in Dhaka, Bangladesh.

A monograph that includes essays on issues raised by the Master Jury’s selections of the shortlist and the winners for the 2022 Award will be published by Architangle in October 2022.