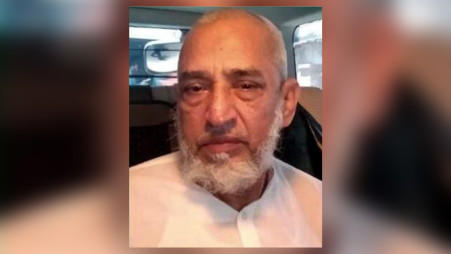 Captain (retd) Abdul Mazed has been hanged at midnight for his involvement in the murders of Bangabandhu Sheikh Mujibur Rahman and most of his family members in 1975.

He was executed at 12:01am Sunday at Dhaka Central Jail in Keraniganj, four and a half decades after the massacre that took place on 15th August, 1975; by a team of hangmen led by hangman Shahjahan, Jailor Mahbubur Rahman said.

This is the first execution in the Dhaka Central Jail at Keraniganj since it was opened.

He also said that everyone involved with the executions wore Personal Protective Equipment (PPE) and maintained social distancing.

Abdul Mazed did not show any reaction on the gallow, sources at the prison said.

Mazed's body will be taken to his village home in Bhola for burial. Jail authorities have already instructed Bhola district's deputy commissioner and law enforcement agencies regarding this, Inspector General of Prisons Brigadier General AKM Mustafa Kamal Pasha told media after the execution.

Meanwhile, members of the Awami League, Jubo League and Chhatra League from nearby areas gathered in front of the prison after hearing about the execution and started chanting slogans.

Inspector General of Prisons, deputy commissioner of Dhaka and the civil surgeon's representative had visited the prison around 11 pm to check the preparations of hanging.

Five members, including the death-row convict’s wife Saleha Begum and four other relatives, went to the jail in the evening on the day and spent around 25 minutes with him.

Earlier on Wednesday night, Bangladesh President Abdul Hamid rejected the mercy petition filed by Captain (retd) Abdul Mazed, hours after the convict had filed the petition. The death warrant was issued by a Dhaka court earlier on the day.

Earlier on April 7, a team of police's Counter Terrorism and Transnational Crime unit arrested Mazed from the capital's Mirpur area.

The trial of Bangabandhu assassination case started in 1997, 22 years after a group of disgruntled army officers assassinated him along with most of his family members on August 15 in 1975 in his Dhamandi-32 residence.

The Appellate Division of the Supreme Court on November 19, 2009 upheld the death penalty of 12 convicted ex-army officers for the assassinations.