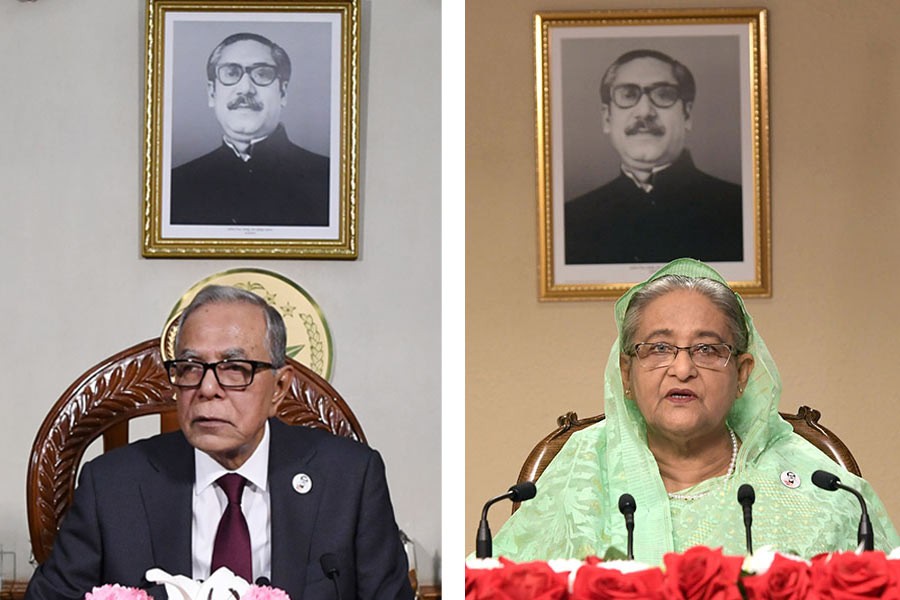 President M Abdul Hamid and Prime Minister Sheikh Hasina have urged the countrymen to turn the grief of the loss of Father of the Nation Bangabandhu Sheikh Mujibur Rahman into strength.

They also urged the people to engage themselves in building a non-communal, hunger-poverty free and prosperous Bangladesh as dreamt by Bangabandhu Sheikh Mujibur Rahman.

The head of the state and the prime minister came up with the statement in separate messages on Friday marking the National Mourning Day, to be observed on Saturday.

“On the National Mourning Day, let us translate our grief into strength and devote ourselves to build ‘Sonar Bangla’ as dreamt by the Father of the Nation,” the President said in his message.

The head of the state said Bangabandhu was a visionary leader and the architect of independence.

“He led the nation at every struggle and democratic movements including the ‘All-party State Language Action Committee’ formed to press home the right to mother-tongue in 1948, historic Language Movement in 1952, Juktafront Election in 1954, movement against Martial Law in 1958, Six-Point Movement in 1966, Mass Upsurge in 1969 and the General Elections in 1970 which all were directed towards realising Bangali’s emancipation and their rights. For this, he had to embrace jail for several times,” he added.

“Bangabandhu was uncompromising on the question of the rights of our people. He, even on the gallows, upheld the interest of Bengal and Bangali. After a long ups and downs, this great leader, ignoring the blood-shot eyes of the then Pakistani rulers, delivered historic address on 07 March in 1971 before a mammoth gathering at the then Race Course Maidan and thunderously uttered, ‘The struggle this time is a struggle for emancipation, the struggle this time is a struggle for independence’ which was, in fact, basically call for our independence. In line with this historic speech, he finally declared country’s independence on March 26, 1971 and subsequently we achieved victory through a nine-month-long armed war of liberation under his leadership,” he said.

Bangabandhu and Bangladesh thus emerged as a unique entity to the people of Bangladesh, he said, adding that though the assassins killed Father of the Nation, they could not wipe out the principle and ideal of this great man.

“As long as Bangladesh exists, the name and fame of Father of the Nation will remain ever shining in the mind of millions of Bangalis of our country,” the president added.

“The birth centenary of Bangabandhu is being observed this year and the Golden Jubilee celebration of our independence will be celebrated in 2021. These two national events are unique milestones in the history of the Bangali nation. I believe, by celebrating these two events with solemnity and dignity, our new generation will be able to know about Bangabandhu and the factual history of our independence. And thus they, being imbued with patriotism, will be able to devote themselves for the development of the country and the nation,” he said.

“The whole world, including Bangladesh, is now fighting against COVID-19 pandemic. The entire globe has become standstill at present due to the adverse impact of coronavirus. The economy, including livelihood, employment, trade and commerce, transcontinental communication etc. are at a stake. The government of Bangladesh has taken all-out measures to address the corona situation. People of the country should extend the hand of cooperation with government efforts to face the challenges. Maintaining guidelines of hygiene in every aspect of life as well as keeping ourselves cautious, we have to be dealt with the pandemic by holding the principle of ‘Carefulness, not fear’” he added.

He went on saying that Prime Minister Sheikh Hasina has set Vision 2021, Vision 2041 and Delta Plan 2100 to transform Bangladesh into a middle-income country by 2021 and a developed-prosperous one by 2041.

“I call upon all, irrespective of party affiliation and opinion, to materialise these programmes unitedly,” he continued.

In another message, the prime minister said, “The 15 August is the National Mourning Day. On this day in 1975, the Greatest Bangalee of all time, Father of the Nation Bangabandhu Sheikh Mujibur Rahman along with most of his family members was brutally assassinated,” she said.

On this National Mourning Day, the premier respectfully remembered all the martyrs of 15 August, 1975 and pray to the Almighty Allah for the salvation of their departed souls.

“Under the visionary and strong leadership of Father of the Nation, the Bangalee Nation broke the shackles of subordination and snatched away our great Independence,” she said.

The anti-liberation forces killed Bangabandhu at a time when he had engaged himself in the struggle to build a Golden Bangladesh along with the whole nation by reconstructing the war-ravaged country, she said, adding that through the killing of Bangabandhu, the defeated forces of the Liberation War made abortive attempts to ruin the tradition, culture and advancement of the Bangalee Nation.

She added that the aim of the killers was to break the state structure of secular democratic Bangladesh and foil our hard-earned independence.

The anti-liberation forces were involved in the carnage initiated the politics of killing, coup and conspiracy in the country right after the 15 August, 1975. They also impeded the trial of Bangabandhu murder by promulgating Indemnity Ordinance, she added.

She said: “Ziaur Rahman illegally took over the state power and promulgated Martial Law by desecrating the democracy and suspending the Constitution.”

He rewarded the killers of Father of the Nation and gave them jobs at the Bangladesh missions abroad, the premier said, adding that he gave the anti-liberation war criminals nationality, made them partners in the state power and rehabilitated them politically and socially.

The subsequent governments of BNP-Jamaat alliance followed the same path, she added.

“Winning the General Elections on 12 June in 1996, Bangladesh Awami League assumed state power after 21 years. A new horizon of socio-economic development in the country started in this 5-year (1996-2001) overcoming the obstacles of the past. We initiated the trial of Father of the Nation murder case. But after coming to power in 2001, BNP-Jamaat alliance government stopped this trial,” Hasina continued.

She went on saying that the countrymen again voted Awami League to power in the 9th Parliamentary Elections on 29 December, 2008.

“Overcoming the stalemate left by the previous BNP-Jamaat government and global economic recession, we have put the country on firm economic footing. During the past eleven and a half years, we have achieved desired advancement in every sector. Bangladesh is now a ‘role model’ of socio-economic development in the world. Bangladesh has attained the status of a developing nation,” she said.

“Amidst present deadly Corona virus pandemic, our government has relentlessly been working to turn Bangladesh into a middle-income country by 2021 and a developed one by 2041,” she added.

“We have already executed the verdict of the Bangabandhu murder case. The trial of the killers of Four National Leaders has been completed. The verdicts of the cases against war criminals of 1971 are being executed. Our government has been following ‘zero tolerance’ policy to uproot militancy terrorism. The path of grabbing state power unconstitutionally has been stopped through the 15th amendment to the Constitution,” the premier said.

“Unitedly, we have to remain prepared to resist any evil-attempt by the anti-liberation communal group, and anti-development and anti-democracy forces. The killers were able to assassinate Bangabandhu but they could not kill his dreams and ideals. Let the glory and ideals of the Father of the Nation’s sacrifice be reflected through our actions in the Mujib Year,” she continued.