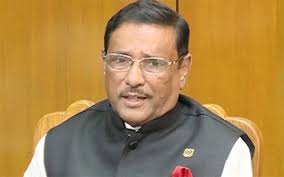 Awami League General Secretary Obaidul Quader  said on Monday  as many as 21,000 leaders and workers of the party were killed during the BNP regime between 2001 and 2006 as they carried out repressions on people after assuming power.

“After assuming power in 2001, BNP carried out repressions on people. Some 21,000 leaders and workers of Awami League were killed during their regime”, he told a discussion, joining it virtually, marking series bomb blast on August 17, 2005, at the party’s Bangabandhu Avenue central office.

He said those who assumed power capitalizing on arms power are now talking about disappearance and killing.

Castigating BNP leaders for their comments that there is no justice in the country, Quader said after the assassination of Bangabandhu, trial of killers remained far away as “we even did not claim justice for 21 years.”

He said BNP staged ‘Joj Mia’ drama to divert the trial in the case of the August 21 grenade attacks to different direction.

Quader said BNP does politics of terrorism, militancy and communalism in the country, so they killed 97 people in the name of “Operation Clean Heart” between October 16, 2002 and January 2003.

The minister said the country and its independence are not safe at the hands of those who perpetrated the assassination of Bangabandhu and made evil designs attempting to assassinate his daughter Sheikh Hasina.

Highlighting the success of the incumbent government, he said Bangladesh has now become a land of enormous potentials in the world map under the dynamic leadership of Prime Minister Sheikh Hasina.

But an evil force is out to make their evil attempts against the development as they want to push the country towards confrontation, he added.

The AL general secretary urged the party leaders and workers to remain alert against all sorts of conspiracies and make united efforts to further strengthen the hands of the premier.

He said banned militant outfit JMB carried out series bomb attacks at 500 places in 63 districts across the country simultaneously on August 17 in 2005 leaving two people killed and wounded 50 others.

Quader said the evil design of carrying out the series bombings was not made in a single day as the militants could not be able to launch such kind of series blasts across the country without backing from the then BNP government.

The AL general secretary said all the bomb blasts including the grenade attack on the Awami League rally at Bangabandhu Avenue on August 21 in 2004 and series bombings on August 17 in 2005 are interwoven with the brutal assassinations of Father of the Nation Bangabandhu Sheikh Mujibur Rahman and most of his family members on August 15 in 1975.

Terming BNP as mastermind of all these bomb blasts, he said these incidents were part of uniform conspiracies and flexing of strength of militant groups as well.

Quader said BNP made the militancy and terrorism a cancer of the country by nurturing and patronizing the menaces. In the name of resisting leftist militants, JMB carried out killings in Rajshahi including Bagmara as processions were brought out led by JMB leader Bangla Bhai and BNP was silent patron of these acts, he added.

Two judges were killed in JMB bomb blasts during that period in order to sustain BNP’s staying in power and to wipe out the spirit of the Liberation War, the minister said.

Expressing their concern over the security of Prime Minister and Awami League President Sheikh Hasina, the AL general secretary urged all to remain alert as they do not want the country to witness recurrence of incidents like August 15 carnage, August 21 grenade attacks, August 17 series bombings and bombings on Pahela Boishakh programme at Ramna Batamul.

He said there is no other brutal incidents like the August 15 carnage in any other country as child and expecting mother could not also escape the death in that massacre. Bangabandhu’s daughter Sheikh Hasina escaped the death as she was staying abroad, he added.

Overcoming all hurdles, he said, Sheikh Hasina returned to this soil in 1981 to materialize the dream of his father Bangabandhu Sheikh Mujibur Rahman, the architect of independent Bangladesh.

Quader said it has been possible to bring the killers of Bangabandhu to justice and trials of war criminals have also taken place as the Awami League government led by Prime Minister Sheikh Hasina remains in power.

He said the BNP founder not only rehabilitated killers of the August 15 carnage but also imposed the Indemnity Act to stop the path to bringing killers to justice.