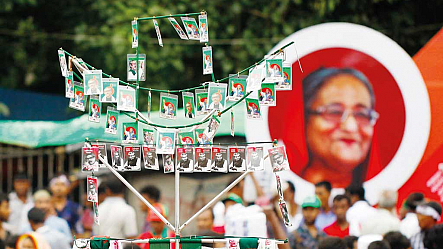 Elections to 24 municipalities have resulted in victory of ruling Awami League candidates in majority of the places so far.

The municipalities are – Panchagarh, Pirganj in Thakurgaon, Phulbari in Diinajpur, Badarganj in Rangpur, Kurigram, Puthia and Katakhali in Rajshahi, Shahzadpur in Sirajganj, Chatmohor in Pabna, Khoksha in Kushtia, Chuadanga, Chalna in Khulna, Betagi in Barguna, Kuakata in Patuakhali, Ujirpur and Bakerganj in Barishal, Gafargaon in Mymensingh, Madan in Netrakona, Manikganj, Dhamrai in Dhaka, Dirai in Sunamganj, Borolekha in Moulvibazar, Sayestaganj in Habiganj and Sitakunda in Chattogram.

Results from some of the municipalities came in at night, showing AL candidates doing better than their rivals.

In Sitakunda, Freedom Fighter and AL nominee Bodiul Alam was elected to the mayor’s office for a second consecutive time.

He bagged 10,829 votes while his nearest rival from BNP, Freedom Fighter Abul Monsur, got 3,072 votes.

In Kushtia’s Khoksha, AL’s Tarikul Islam has been elected mayor for a second consecutive time.

According to unofficial results, he has received 9,327 votes and his nearest rival, BNP’s Nafiz Ahmed, got 1,583 votes.

In Manikganj, AL’s Ramjan Ali has won beating his only rival, BNP’s Ataur Rahman, by 29,251 votes.

In Dhamrai, AL candidate Golam Kabir is leading the mayoral race with 23,110 votes. His nearest rival, BNP’s Najim Uddin Monju got only 1,503 votes. The results will be announced on Tuesday morning.

SM Ikbal Hossain Sumon has been victorious at Gafargaon in Mymensingh. His rival was BNP candidate Shah Abdullah Al Mamun.

BNP candidate Farid Ahmed has been mayoral elect of Sayestaganj in Habiganj. He is going to hold the post for the second consecutive term. He got 4,033 votes while his rival Awami League candidate Masuduzzaman 3,258.

In Barguna, Awami League nominated candidate ABM Golam Kabir has been victorious defeating BNP contestant Humayun Kabir Mallik. Kabir has been elected for the second consecutive term securing votes which are 11 times higher than that of the rival.

The Election Commission held the vote under the first phase. Starting at 8:00am, vote casting continued till 4:00pm. Many places saw the use of EVM machine.