Foreign envoys shower praises on Hasina for leadership during pandemic 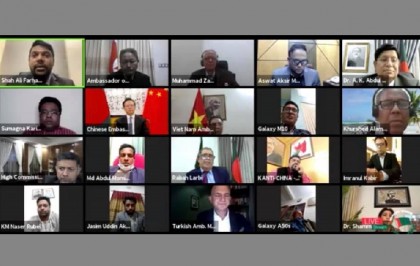 The envoys of various countries to Bangladesh have highly praised Prime Minister Sheikh Hasina for her leadership during the Covid-19 pandemic.

They showered the praises on Sheikh Hasina while addressing a special webinar titled "Political Leadership: Then and Now", organised by the International Affairs Sub-Committee of Bangladesh Awami League on Saturday.

The webinar was organised marking the completion of two years of Prime Minister Sheikh Hasina’s fourth and current tenure as head of government and the birth centenary of Father of the Nation Bangabandhu Sheikh Mujibur Rahman.

Foreign Minister Dr AK Abdul Momen was present as the chief guest in the webinar addressed, among others, by Chairman of the Int’l Affairs Sub-Committee Ambassador Muhammad Zamir and International Affairs Secretary of Bangladesh Awami League Dr Shammi Ahmed.

Dr Shammi Ahmed highlighted the progress and development Bangladesh has witnessed during the 12 years of Prime Minister Sheikh Hasina’s leadership as the head of government, including economic growth, infrastructural development such as the Padma Bridge, poverty reduction, women empowerment, education, and health sectors.

She said Sheikh Hasina showed the real leadership during the difficult situation of the pandemic.

She also highlighted how Hasina has demonstrated her commitment to humanitarian issues like the Rohingya crisis, and appealed to the international community to stand by Bangladesh in resolving this crisis.

Foreign Minister Dr Momen, after launching the memorial publication on Bangabandhu, focused on various aspects of the Father of the Nation’s leadership in building ‘Sonar Bangla’.

Dr Momen stressed that a governance mechanism was in place to ensure food, harvest, and shelter during the pandemic.

He appreciated the safety net programmes and stimulus packages that the Prime Minister has put in place as a means of minimising the adverse impacts of the pandemic on the economy and society.

Li Jiming, the Chinese Ambassador to Bangladesh, stated that what the Awami League-led government has achieved over the last decade for Bangladesh was simply ‘exceptional’.

He stated there is still broader scope of cooperation between Bangladesh and China, both between governments as well as between political parties.

Vikram Doraiswami, the High Commissioner of India to Bangladesh, stated that during the last decade, the development achieved by Prime Minister Sheikh Hasina and her government is “no mean achievement” in any way.

He claimed that India's commitment to Bangladesh is unshakeable, and the roots of the relationship between the two countries supersede any strategic partnership.

Mustafa Osman Turan, the Ambassador of Turkey to Bangladesh, stated the country’s progress under the Awami League government is “well documented and recognised” by the international community.

He noted that the nation is enjoying sustainable development and is the rising tiger of South Asia.

Ambassador Turan lauded the Bangladeshi peoples’ resilience in the face of natural calamities and the pandemic.

Ambassador Muhammad Zamir said that owing to Sheikh Hasina’s pragmatic and time-befitting policy action, today’s Bangladesh is a role model of sustainable development, a far cry from the comments of Henry Kissinger about the infant nation of Bangladesh in the 70s.

He appreciated the Prime Minister’s strong leadership during the pandemic, and appealed for greater cooperation among all countries of the world, in general, and between the Asian countries, in particular, to united combat the impacts of Covid-19 and achieve mutually beneficial development.

The Ambassadors of Algeria, Vietnam, and DPR Korea, were also present together with diplomatic officials from, among others, the missions of the UK, the USA and Japan.

Barrister Shah Ali Farhad noted that the two contents released today, the video documentary and the memorial publication, will soon be uploaded in the official website, Facebook page and Youtube channel of Bangladesh Awami League.