Strong opposition is a must: PM Hasina 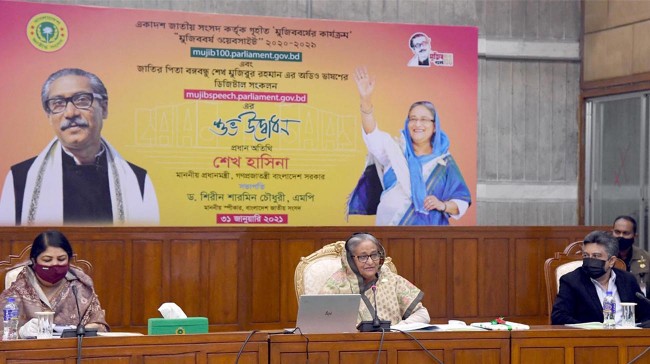 Prime Minister Sheikh Hasina on Sunday said a strong opposition in the country is a must to make democracy work for people.

"For a democracy, a strong opposition party is a must as we want our democratic trend continues," she said.

The Prime Minister said this while addressing the inaugural ceremony of 'Programmes of Mujib Borsho', 'Mujib Borsho website 2020-21' and digital compilation of Father of the Nation Bangabandhu Sheikh Mujibur Rahman by the 11th National Parliament at the Oath Room of the Jatiya Sangsad Bhaban.

Sheikh Hasina said the present opposition parties in Parliament could not attain the confidence and trust of people at their desired level due to the lack of leadership of the opposition parties. “Parliament has its own role in continuing the democratic system in the country.”

Public representatives can speak for people in Parliament, she said recalling her days as opposition leader in the House when they had faced a lot of problems in speaking up for people. "But we can say we aren’t creating that types of problems sitting at the treasury bench," she said.

Talking about coronavirus and vaccine, the Prime Minister said Bangladesh attained a considerable success in facing the pandemic. “With the arrival of the vaccine, it [govt] has gained power to face the virus with a greater strength.”

Regarding the contributions of the Father of the Nation, Hasina said there had been frantic efforts to erase the name of Bangabandhu from Bangladesh history after August 15, 1975.

"Even they tried to erase the name and contribution of Bangabandhu from the Independence and Language Movement," she said.

She said Bangabandhu wanted to build a country that would be free from poverty and hunger.

"But he couldn’t do that. So, it’s our responsibility to finish his unfinished task, and we’re taking Bangladesh forward in that direction," she said.