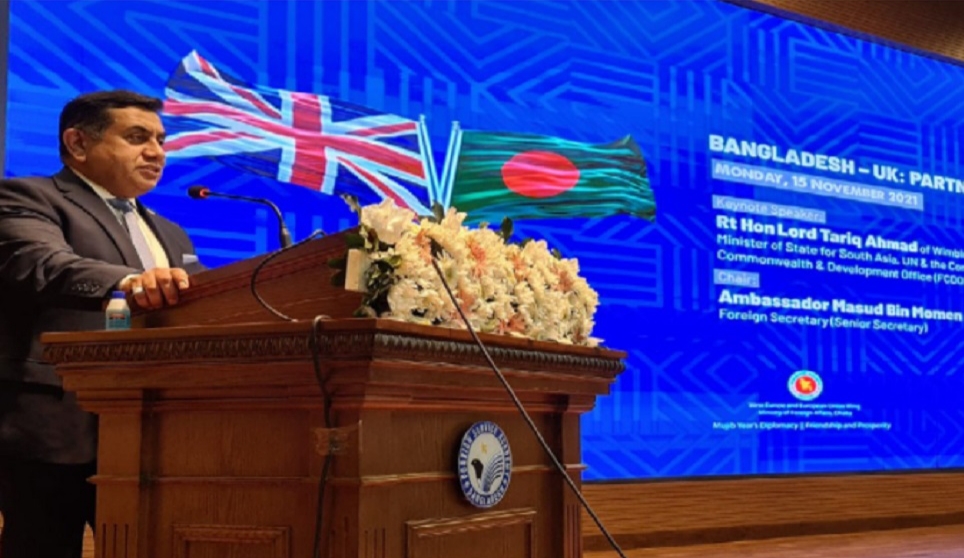 UK’s Minister for South Asia Lord (Tariq) Ahmad of Wimbledon on Monday expressed optimism that the citizens of Bangladesh will have an open and vigorous debate about the country’s direction as Bangladesh approaches its next election period.

“Inclusive politics are essential for every country’s prosperity, something that the Father of the Nation (Bangabandhu) Sheikh Mujibur Rahman knew very well,” he said, adding that the constitution (Bangladesh) emphasizes both transparency and due process which is a real guiding light to everyone.

The British Minister said Bangladesh, on Bangabandhu’s legacy, has built something quite remarkable and there is an opportunity for this great nation to go even further.

He made the remarks while delivering keynote speech at a programme titled “Bangladesh-UK: Partners in Progress' with Foreign Secretary (Senior Secretary) Masud Bin Momen as the chair. The event was held at the Foreign Service Academy.

Lord Ahmad, also the Minister for the United Nations and the Commonwealth at the Foreign, Commonwealth & Development Office (FCDO), said as a steadfast friend and partner of Bangladesh they value this unique relationship and friendship.

“Our message is simple - to all of you from all of us. I assure we’re partners for today and for the future. As close and honest friends, we look forward to further strengthening this unique partnership,” he said.

The UK Minister who began a three-day visit here to mark the country’s Golden Jubilee of Independence, said they will continue to work with Bangladesh for further strengthening human rights for everyone. “Rights of others must be protected everywhere.”

Lord Ahmad, who is also the UK Prime Minister’s Special Representative on Preventing Sexual Violence in Conflict, is expected to meet Prime Minister Sheikh Hasina during his stay in Bangladesh.

“The UK and Bangladesh are partners in trade, development, peace and security, and climate,” the UK Minister said after his meeting with Dr Momen.

During his meeting with Foreign Secretary Masud, he discussed the outcomes from COP26 and Covid recovery.

They also discussed Afghanistan issues and other shared interests and commitment to UK-Bangladesh friendship.

The UK Minister discussed his aspirations for the next 50 years of friendship between the UK and Bangladesh, with opportunities for increased trade and investment, closer security cooperation, and UK support to critical climate projects.

£54mn announced for education in Bangladesh

He announced that the UK would invest up to £54 million (around Tk 622) in support for education in Bangladesh.

The funding will be used for two new programmes which will help ensure disadvantaged girls and young people will have access to a quality education.

The first programme, called ‘Educate the Most Disadvantaged Children’, will provide catch-up and accelerated education for marginalised out-of-school children in hard to reach areas, focusing on girls and children with disabilities.

It aims to reach over 360,000 children, supporting them to gain foundational learning and, where possible, re-enter formal education.

The UK will work with the government of Bangladesh’s Bureau of Non-Formal Education to strengthen the non-formal education sector and will fund robust research to build the evidence based on ‘what works’ to bring disadvantaged children back to school in Bangladesh. The programme will be delivered with partners, including Unicef and BRAC.

It will work alongside the government of Bangladesh to improve students’ learning, strengthen the education system’s efficiency and effectiveness, and enable adolescent girls to stay and learn in secondary school. The programme will be delivered with partners, including Unicef and the World Bank.

Lord Ahmad said educating girls is one of the smartest investments they can make to fight poverty and save lives.

“Today I announced new UK funding of up to £54 million to support education in Bangladesh, with a focus on ensuring all children, but especially girls and those with disabilities, have access to a high-quality education,” he said.

The minister said increasing access to literacy and skills will bring benefits to children and their families and will drive Bangladesh’s continued economic growth.

Lord Ahmad will represent the UK at the Indian Ocean Rim Association Council of Ministers, as Bangladesh assumes the Chair from the UAE.

He will also visit Cox’s Bazar and discuss solutions to support the Rohingya refugees from Myanmar.

Ahead of his arrival, Lord Ahmad said, “I’m delighted to be returning to Bangladesh in its Golden Jubilee year and look forward to celebrating the tremendous achievements of the past half century with friends old and new.”

He said the relationship between the two countries is founded on a shared history and strong ties. “I’m confident that our partnership will continue to flourish over the next fifty years and beyond.” 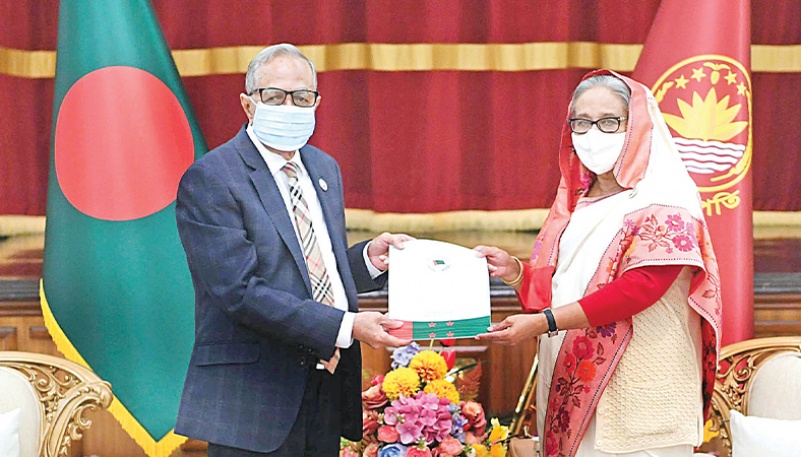