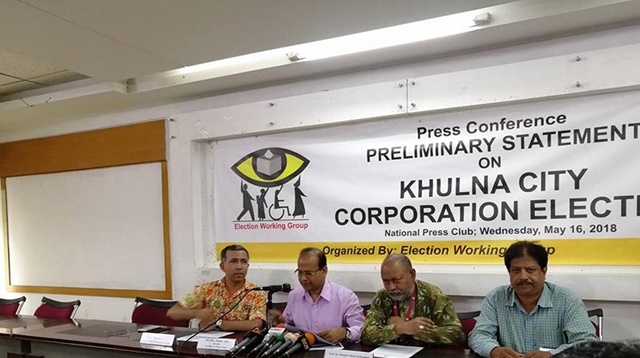 “While there were attempts to alter the outcome of the vote in a number of polling stations, due to low number of attempts observed, it does not appear that they are significant enough to undermine the results of the election,” the EWG said in its preliminary statement on KCC.

"But these incidents did not have any impact on the election," said EWG director Dr Md Abdul Alim.

He said the people’s expectation from the KM Nurul Huda-led EC rose after the Rangpur city polls on Dec 21 last year.

“The success the Election Commission achieved in Rangpur should have been continued. Everyone is a little frustrated as it has not happened,” Alim said.

Fair Election Monitoring Alliance President Munira Khan said, “We saw worse elections before (than in Khulna)…The polls in Khulna were fair and acceptable on the whole.”

She added the EC would have to do more to increase its efficiency.

However they rejects BNP's complain regarding absense of polling agents, Presiding officer arnd other officials.

The EWG is a non-partisan network of 28 leading civil society organisations in Bangladesh that was formed in 2006 with the shared goal of enhancing the transparency and accountability of elections and other democratic processes in the country.