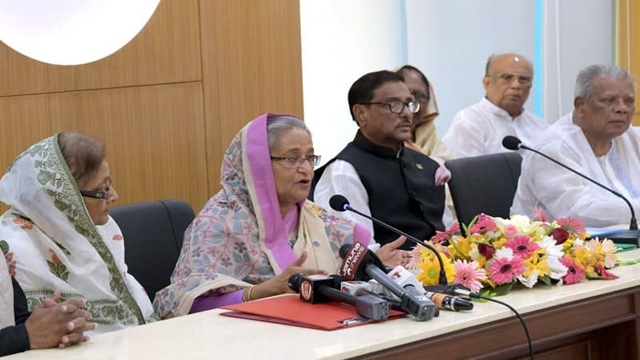 The Awami League will celebrate 'Mujib Year' across the country from March 2020 to March 2021 marking the birth centenary of Father of the Nation Bangabandhu Sheikh Mujibur Rahman.

Prime Minister Sheikh Hasina, also the AL chief, made the announcement on Friday during a meeting at the party's central office in Dhaka.

It was the first such meeting of the party at the newly constructed central office at Bangabandhu Avenue after its inauguration on June 23.

"Elaborate programmes will be taken to celebrate the birth centenary of the great leader as my government and party want so," Sheikh Hasina said.

She said programmes will be taken at both government and party initiatives involving people from all walks of life.

The Prime Minister said she has already directed the cabinet secretary to undertake necessary measures to chalk out programmes on government initiatives to this end.

On the occasion, various programmes throughout the year of 2020 and those will continue until March 26, 2021, the golden jubilee year of the country's independence, she added.

Sheikh Hasina said the decision will be finalised after discussions with the party leaders.

She said Awami League leaders and workers want to pay the debt of blood of the great leader through bringing smile to the faces of the poor and distressed people for whom he had sacrificed his life.

Following his footprint, Sheikh Hasina said, her government implemented massive development programmes coming to power in 1996 and again in 2009, whereby it has been able to ensure food security, healthcare, education and other basic needs of people.

As a result, Bangladesh is now advancing towards the path of materialising the dream of Bangabandhu as it is now on the highway of development and is recognised as a developing country, she said.

Hasina regretted that a section of her political opponents who never wanted the country to be free from poverty and hunger termed Bangladesh's graduation as a developing country as 'ruination'.

Pointing to the micro-credit system, she said the way of developing own fate with the money of the poor people against distributed micro-credits has now become limited.

The Prime Minister observed that the poor are now getting the benefits of the government's achievements like low inflation, high growth rate, increased power generation and other pro-people developments.

"When the GDP rate is high with low inflation, its benefit will be distributed among all, including those living in rural areas," she said.

She vowed to maintain the ongoing development trend to establish Bangladesh as a country free from poverty and hunger by 2021 as well as a developed one by 2041.

Meanwhile, Sheikh Hasina said steps have been taken to publish a book in 14 volumes on Bangabandhu based on the Pakistani intelligence report on his political activities from 1947 to 1971.

She said the first volume is at the final stage, while the total volumes will be of 9,000 pages compiled from 40,000 pages of 47 files of the then Pakistani Intelligence Report.

Two more books -- one on the Agartala Conspiracy Case court proceedings having a number of volumes and another on his Bangabandhu's to China in 1952-- will also be published, the Prime Minister said.

The Prime Minister said Bangladesh will move ahead and it will be a middle-income country by 2021 and a developed one by 2041.