BNP has no future if they do not leave the company of militants and Razakars:Information Minister 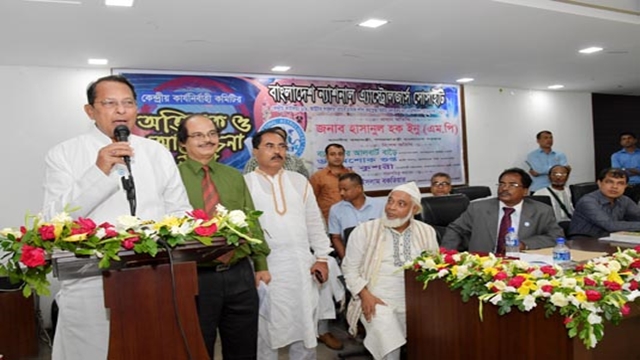 Information Minister Hasanul Haq Inu said, "BNP has no future if they do not leave the company of militants and Razakars." Because as long as the BNP tries to control the fate of Bangladesh with these criminals, people will resist them.
The minister said this while addressing the inauguration and discussion of the central executive committee of the National Astrologers Society at the conference lounge of the National Press Club in the capital on Tuesday noon.
The minister praised the astrologers, saying that Sheikh Hasina's government holds the umbrella of co-operation in the study of all the branches of science and culture, and said that they have encouraged people and society in good work, alerted them from bad and alerted them about the future by analyzing the past and present.
Hasanul Huq Inu said, "Father of the Nation Bangabandhu was a futurist. He did not go to Bangladesh inside Pakistan. Under his leadership, we are free today. Likewise, Prime Minister Sheikh Hasina also saw democracy with military rule. Under his leadership, democracy is being established in the country today.
On the other hand, BNP and convicted Khaleda Zia have given consent to the killers of Razakar and Bangabandhu in the past, she said, "They are still fostering militant-Jamaat and fire fighters." That's why the danger of the country is not yet To keep the country on the country from their hands, Sheikh Hasina's government will have to win the next election.
President of the Astolars Society Barrister Albert Baroie spoke on the occasion as special guest in the chairmanship of Md Nurul Islam Baktiyar. Ashok Gupta and Subir Kusari.