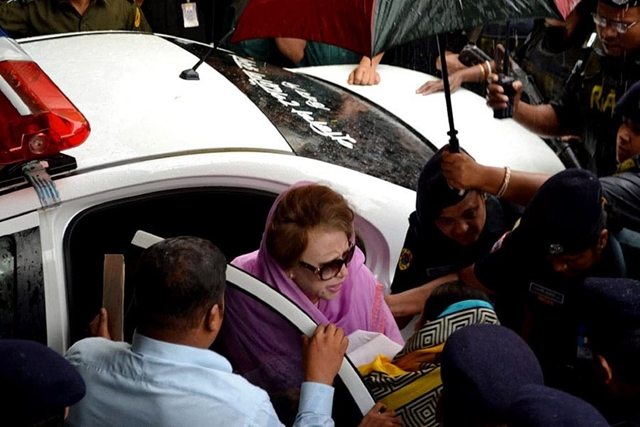 Inspector General of Prison Brigadier General Syed Iftekhar Uddin Ahmed said she was taken to the Cabin Block of the hospital in a blue Pajero jeep around 3:40 pm.

She will be kept in a cabin on the 6th floor of the Cabin Block of the hospital. Earlier, the authorities concerned booked room No 612 and 613 for Khaleda Zia.

Four police vehicles escorted her to the hospital while BNP leaders and activists paid respect to their leader standing on both sides of the road.

Earlier, her orthopedic bed was shifted from the central jail to the cabin block around 2:55 pm.

BSMMU director Brigadier General Harun-Ur-Rashid and other physicians were present when the jeep carrying Khaleda reached the hospital gate.

The High Court on Thursday directed the government to immediately admit Khaleda Zia to the BSMMU and form a 5-member medical board afresh for her treatment.

Khaleda Zia was in the erstwhile Dhaka Central Jail at Nazimuddin Road since she was sentenced to five years' imprisonment in the Zia Orphanage Trust corruption case on February 8.

On September 16, a medical board formed by the government for jailed Khaleda, suggested admitting her to a hospital like BSMMU though they have found 'no symptom of any serious disease' in her.

On April 7 last, Khaleda Zia underwent some medical tests at the BSMMU because of her illness.

BNP has been demanding that Khaleda be shifted to United Hospital in the city for her better treatment.