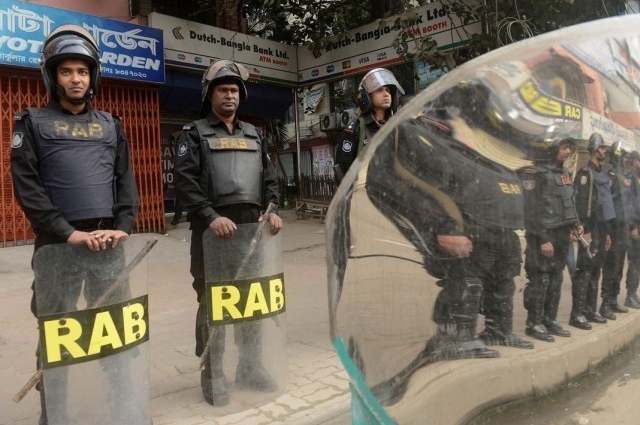 The government is taking up a project to task the Rapid Action Battalion or RAB with monitoring the social media for four months leading to and after the next general elections.

The move comes at a time when the government is being criticised for passing a law that journalists and rights groups fear will curb the freedom of expression.

Preparations are under way for the 11th parliamentary elections scheduled for anytime between October 30 this year and January 28 next year.

Under the new project, the RAB will watch activities like anti-state propaganda, rumours, fake news, and provocations on Facebook, YouTube, Viber, WhasApp and other means of communication on the internet for two months before and as many months after the balloting.

A pre-evaluation committee at the Planning Commission’s Socio Economic Infrastructure Division cleared the over Tk 1.21 billion project on Sunday. It will now be presented before the Executive Committee of the National Economic Council or ECNEC.

The four-month project under the home ministry’s Public Security Division will start in November, according to the project proposal.

Muhammad Dilwar Bakht, the Planning Commission Member in charge of the Socio Economic Infrastructure Division, declined comment on the project when he was asked about this.

But a top official of the division, requesting anonymity, confirmed that the pre-evaluation committee cleared the project. The official requested not to be named as he was not authorised to speak about the issue now.

“Yes, we will implement a project like the one you are talking about,” RAB spokesman Mufti Mahmud Khan said when asked whether they will implement the project.

“Besides maintaining law and order in the country, we will implement this to monitor the evil propaganda and militant activities on the social media and bring the people behind these to justice,” he added.

The government has recently passed the Digital Security Act, saying it will safeguard the citizens from mischievous activities on the internet and other electronic media.

Journalists and local and international rights groups, however, have protested against the law. They fear the law will curb journalism and free speech.

The ruling Awami League made the law to muffle criticism before the vote, its rival the BNP has alleged.

When wild rumours fanned across the social media amidst the student protests for safe roads, Monirul Islam, the chief of the police’s Counterterrorism and Transnational Crime unit, expressed concern over a possible rise in the number of such cybercrimes during the elections.

According to the proposal for the new project, it aims to:

>> identify and bring to justice those trying to mislead the people through evil propaganda against the state, rumours, false information, and provocation;

>> report and take other steps to get blocked the pages and accounts used to carry out misleading propaganda;

>> prevent spread of rumours and false information among foreign states, development partners, organisations, and people to safeguard Bangladesh’s image; and

>> publicise positive sides of the government to save the people from confusion.

Different media contents would be made under the project. Software would also be made and equipment bought.

The proposal has cited some recent propaganda against the state, which were based on popular social networking site Facebook, to explain the project’s necessity, bdnews24 reported.

“Some quarters with vested interests carried out evil efforts to mislead the people by publishing negative information against the state on the social media, capitalising on recent movements,” it said.

Such quarters attempted to destabilise the country and corner Bangladesh in the international arena by sending false information to different global organisations, and government and non-government offices abroad, it added.

It said it proposed RAB as the implementing agency of the project because, in many cases, the people behind such anti-state quarters cannot be identified.