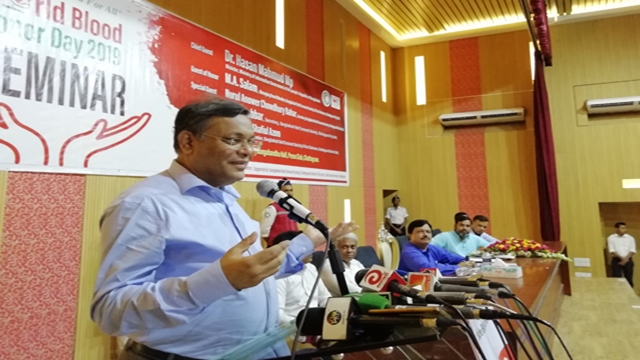 Rejecting the criticism of CPD and BNP about the national budget for fiscal year 2019-20 as typical, Information Minister Dr Hasan Mahmud said if the budgets were typical or not realistic in the last 10 years how the country witnessed tremendous progress during the period.

“They (CPD and BNP) should either give explanation in support of their criticism or stop it,” he added.

Dr Hasand said those who criticize using the names of the different organizations are the plotters and the perpetrators of 1/11.

“They (CPD) also try to find out faults of the government before and after each national budget. Now question has arisen, does the CPD work only to look for others’ faults?” he questioned.

The Awami League Publicity and Publication Secretary said the purchasing capacity of the country’s people has become double, but it is a matter of regret that the BNP and CPD have been looking for loopholes of the government over the last 10 years.

Dr Hasan said this while addressing as chief guest a Seminar of Blood Donor Day-2019, held at Bangabandhu Hall of Chattogram press club here this evening.

He said BNP and CPD reacted in the same way about the national budget for the last 10 years, but every budget helped build the country as a developing nation.

“Those who are criticizing the budget are doing it from a negative frame of mind. Their criticism is based on anti-Awami sentiment,” he said.

From a least developed country, Bangladesh has now become a middle-income country, he said, adding that from a country of food shortage, Bangladesh now became a food-surplus country, the death rate of mother and child tremendously reduced and the life expectancy of the people increased to 73 years from 39 years.

“Bangladesh is moving forward in every sector. But, BNP and CPD did not see those,” said Dr Hasan.

Noting that per capita income of the people increased three times during the period of Awami League led government, the Information Minister said adding 10 years ago, the per capita income was only US$ 600 which is now US$ 2,000.

He said the country is going ahead under the leadership of Prime Minister Sheikh Hasina and the entire world is lauding her leadership.

“The government carried out many development programmes in the country, particularly in economic sector, in last 10 years. But, CPD did not see those. It is their failure . . . we hope that CPD will see the progress and development of the government,” he said.

Dr Hasan said BNP is spreading propaganda about the budget claiming that it is not pro-people. But if it is closely analyzed, anyone finds that adequate allocation has been made for every sector including education, health and social safety net because the government wants to turn the country into a social welfare state.

“Bangladesh is not now the country of food scarcity rather it has already emerged as a food surplus nation,” he added.

But when BNP came to power in 2001, the country again went backward and became a country of food deficit, he said.

But when AL-led grand alliance came to power in 2008, the country achieved food surplus again because of time-befitting steps including providing subsidy to fertilizer and seeds.