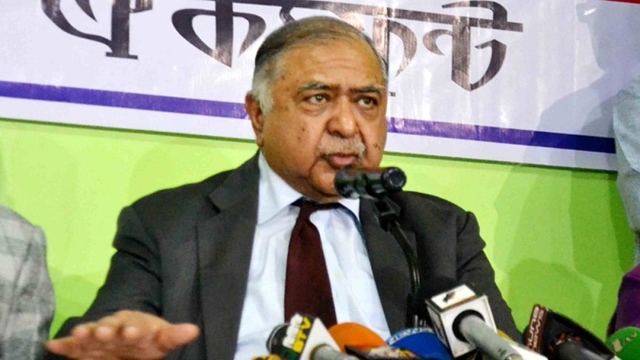 The future of Dr Kamal Hossain-led Jatiya Oikyafront looks bleak as its partners have started following a ‘go-alone policy’ amid deepening mistrust and misunderstanding among themselves over various issues.

After the drubbing in the December-30 election, the top alliance leaders announced to be active on the streets with various programmes to force the government to hold fresh polls.

But it could not come up with any effective political programme, except submitting a memorandum to the Election Commission, visiting a rape victim in Noakhali’s Subarnachar, holding a mass hearing on election, and forming a human chain programme in the capital.

Even, no meeting of Oikyafront’s steering and coordination committee was held over the last one and a half months because of the unwillingness of its components.

The alliance leaders had a decision that its MPs-elect would not take oath, but BNP and Gonoforum moved away from it by sending their MPs to parliament, creating a misunderstanding among the alliance partners.

Getting frustrated over the inaction of the alliance and inconsistencies in it, Abdul Kader Siddiqui-led Krishak Sramik Janata League quit the Oikyafront on July 8.

The top leaders of other components, including BNP and Gonoforum, who are still with it, have no clear answer about the future of Oikyafront.

At a press conference of Gonoforum on Monday in the city, journalists repeatedly wanted to know from Dr Kamal about the future of Jatiya Oikyafront and reason behind its inaction over various issues, including current flood, but he parried the questions insisting that it was their election alliance.

“Oikyafront was formed with some political parties ahead of the election on political consideration. But, I think, people’s unity, not the Jatiya Oikyafront, is important to tackle it (flood).” The unity of not only a few parties, but also that of all parties and people is necessary to overcome the situation.”

A Gonoforum leader close to Dr Kamal said a distance between Gonoforum and BNP has created over some issues.  “Sir (Kamal) is unhappy with BNP as the party still didn’t leave Jamaat. Besides, he doesn’t want to run the alliance as per Tarique Rahman’s suggestion, but BNP wants to do so.”

He also said Dr Kamal got angry as BNP activists at a discussion programme at the Jatiya Press Club tried to force him to mention Ziaur Raman’s name by creating a pandemonium.

Under the circumstances, the Gonoforum leader said, “Kamal Hossain is trying to reorganise his own party with various programmes, like member collection drive programme and a seminar on Bangabandhu in August.”

Replying to a question about Oikyafront’s future, he said, “The alliance has no programme now. We’ll sit in talks with the alliance leaders at a convenient time to talk about its future and next course of action.

Asked whether he supports Dr Kamal’s remark that Oikyafront is an election alliance, Fakhrul declined to make any comment on it.

However, a BNP standing committee member, wishing anonymity, said they are trying to back off from the Oikyafront as their grassroots have no interest in it.

“Our party rank and file has lost interest in Oikyafront for various reasons, including Dr Kamal Hossain’s dubious role. He is unwilling to talk against the government and raise the demand for the release of our chairperson. Even, at the political meetings of Oikyafront he always praises Bangabandhu, but never mentions the name of our fonder Ziaur Rahman. It only hurts our party men,” he said.

The BNP leader said their party is now focusing on strengthening its organisational capacity to mount pressure on the government to free Khaleda Zia from jail. “We’re now holding rallies at different divisions to invigorate our grassroots. We’ll take some other programmes after eid. So, we’re not thinking about the future of Oikyafront now, and not even the 20-praty.”

The BNP leader said they do not want to draw any conclusion about the future of the alliance as Khaleda Zia will take the decision on it once she is freed from jail.

Jatiya Samajtantrik Dal general secretary Abdul Malek Ratan said they are doubtful about the future of Oikyafront as the alliance has become inactive. “Overall, the sign is not good.”

He said their party is now busy taking preparations for holding its next council in the last week of October.

The alliance took part in the December-30 national election using BNP’s election symbol, the Sheaf of Paddy, but got only eight seats -- BNP six and Gonoforum two.