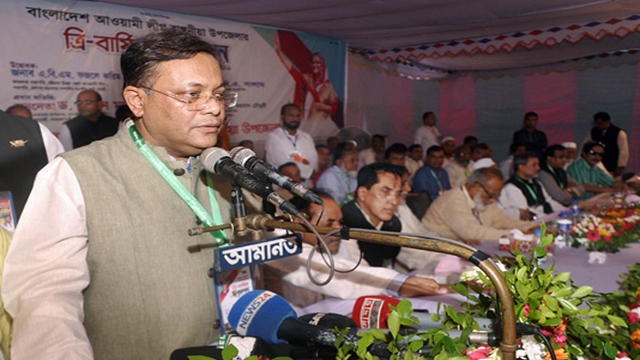 Dr Hasan, also publicity and publication secretary of Awami League (AL), said that the rumour of child lifting was first posted from London which subsequently spread across the country in league with BNP-Jammat activists.

“The mastermind of rumour of child lifting is now in London from where the ill-campaign is being triggered,” the information minister came up with the observation while speaking at the triennial conference of Rangunia upazila unit of AL, held on Nurjahan Club premises this afternoon.

Hasan said a vested quarter is out to conspire against the country after being rejected by the people. This quarter is spreading the rumour about the construction of the Padma Bridge, he added.

“The government is taking tougher legal actions against the kingpins involved in spreading the rumours and the persons responsible for the murders must be brought to the book,” the minister asserted.

He said the persons who are behind the rumours are equally convicts and none will be spared in this regard.

The information minister said AL is a party of mass people and added those, who had dedicated themselves to the cause of the party, must take the leadership of the organisation.

“Presently everybody wants to board on the boat of AL but we cannot take them as our boat is full to the brim,” Hasan said.

Referring to the remarks of BNP senior joint secretary general Rizvi Ahmed, Hasan said BNP is now behaving foolish and termed his remarks about AL as farcical and politically bankrupt.
Speaking on the occasion Fazle Karim Chowdhury, Chairman of Parliamentary Standing Committee on Railways Ministry said Chattogram -Kaptai road will be elevated to a highway.

He said initiatives would be taken to set up rail line from Chattogram to Kaptai, a tourist hub of the country.