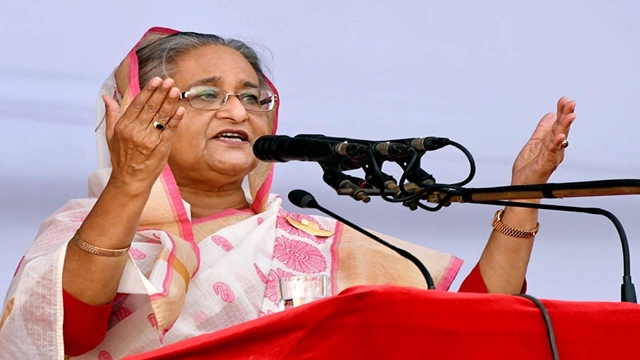 Prime Minister Sheikh Hasina has urged all to remain united against militancy, terrorism and corruption.

“We have to work together to protect the youth from militancy, terrorism and drugs,” she said.

Sheikh Hasina made the call while addressing the Awami League’s rally on Wednesday to mark the 46th anniversary of the historic speech of Bangabandhu Sheikh Mujibur Rahman.

Sheikh Hasina said the culprits who were involved in crimes against the humanity, genocide, looting, arson, rape, and handed over the country's women to Pakistani occupational forces must not be in power.

The Prime Minister said those who were involved in embezzling orphans' money, siphoning off public money, killing people through arson attacks, in the murder of 27 law enforcement personnel should be kept out of power forever.

"If they come to power, they'll force the country towards the path of destruction," she said.

She also urged the people of the country to remain united for advancing the country imbued with the spirit of the great Liberation War.

The gathering at Suhrawardy Udyan began from the morning.

Thousands of Awami League leaders, activists and supporters thronged the venue with banners, placards, festoons and other displays.

Bangladesh is observing March 7 this year with renewed pride as UNESCO has recognised Bangabandhu’s speech as part of world heritage.

On this day in 1971, the independence leader delivered an inspiring speech at the then Race Course Maidan, now the Suhrawardy Udyan, in Dhaka, effectively declaring the Liberation War against Pakistan.

Eighteen days after the speech, as the Pakistani military began its operation in Bangladesh, the people took up arms. After nine months of struggle, Bangladesh achieved its independence.

The defeated Pakistani military signed the order of surrender at that same Suhrawardy Udyan on Dec 16, 1971.