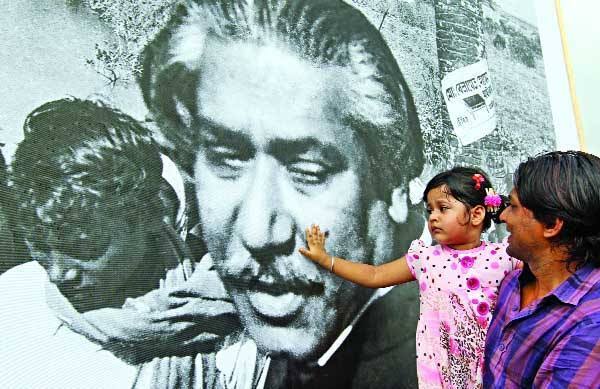 When I came to Dacca in January 1972, I was advised by UN, British and other aid officials to pay a courtesy call on Sheikh Mujib. My meeting was organized by Tajuddin Ahmed, who I had met a few times in Calcutta in 1971 when he was Prime Minister of the Mujibnagar government. My meeting with Sheikh Mujib is one I will never forget. I told him that I wanted his advice about what a small organization like OXFAM might be able to do to assist in the rehabilitation and development of Bangladesh. Sheikh Mujib took his pipe out of his mouth and pointed the stem of the pipe at me. "How did you come here, young man?", he asked in a booming voice. I told him that I had driven overland from Calcutta. "In that case", he told me, "You have seen more of my country than I have, as I was a prisoner for over nine months, so please tell me what you think my country needs. What have you seen?"

I told Sheikh Mujib that I had seen many villages that had been burnt down, many bridges and culverts blown up and many ferries and launches, large and small, sunk in the rivers. I told Sheikh Mujib that, on behalf of OXFAM, I had already ordered, in India, £ 250,000 worth of C.I. sheets for a big house rebuilding programme and these would arrive by early March. I added that I thought that bridge building and replacement and repairs of ferries were more suited to bilateral and multilateral aid. "No", Sheikh Mujib said, "Ferries are and will be the lifelines of food supplies for my people. Please discuss with officials of the Bangladesh Inland Waterways Authority and see what OXFAM can do."

Before I left him, Sheikh Mujib asked me about my experiences working with the people of Bangladesh in the refugee camps and what would I remember most. As I spoke, emotion got the better of me and tears welled up in my eyes. I told him that I would always remember, most of all, the plight of the children and that so many never lived to see and enjoy their new country. They perished because of acute hunger and disease (a rough estimate is that at least 1 million children perished in the refugee camps in India). Sheikh Mujib wiped his own eyes and put his arm around me and asked me more details about the state of the children in the camps. "I will always remember about 20 children fighting over one boiled egg," I told him and added, "In the same camp I saw a child in the milk queue vomit and collapse and nearby a woman groaning and giving birth in the mud." I told Sheikh Mujib that I had met parents who had given up hope of ever seeing their children well again. I told him that I will never forget seeing infants with their skin hanging loosely in folds from their tiny bones-lacking the strength even to lift their heads. Also, seeing the children with legs and feet swollen with oedema and malnutrition, limp in the arms of their mothers.

From my time with Bangabandhu in early 1972, it was so very clear how concerned he was about children, particularly the new generation of Bangladeshi.

Julian Francis was with Oxfam in 1971 and had personal experience of the War of Liberation. Since the emergence of Bangladesh, he has contributed in diverse capacities to the country's progress. He has been recognized as a friend of Bangladesh through being awarded the Friends of the Liberation War by the government of Bangladesh.