Tigers beat Australia by 23 runs in a shocker; lead series 1-0 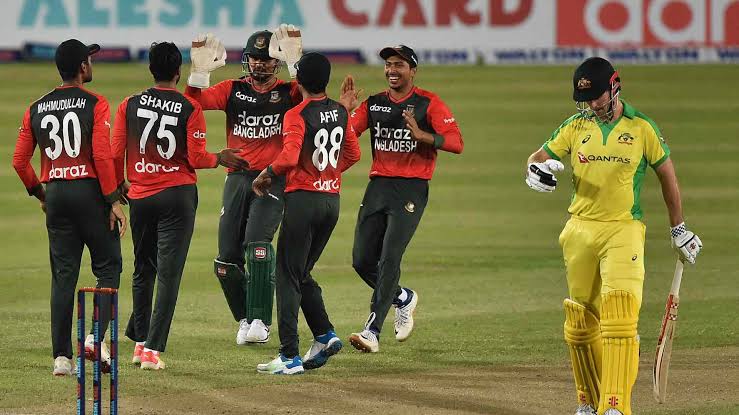 The Bangladesh cricket team pulled off a massive upset as they beat mighty Australia by 23 runs in Dhaka on Tuesday.

The match was the first of a five-match T20 series between the two sides.

Bangladesh could only manage to post a score of 131 on the board in their 20 overs. However, what might have looked like an easy victory for the Aussies was thwarted by spinner Nasum Ahmed who picked four wickets. The Bangla Tigers lead the five-match series 1-0 after the incredible victory.

Australia had won the toss and decided to field first. After the conclusion of the first innings, it surely seemed like the correct decision but Bangladesh had other plans.

There were only four players in the Bangladesh side that got into double figures. All-rounder Shakib Al Hasan scored the most runs with 36 off 33 deliveries. Opener Mohammad Naim gave the team a good start with 30 off 29 balls. Skipper Mahmadullah scored 20 at a run-a-ball while Afif Hossain smashed 23 off 17 deliveries. No other player from the subcontinent side could get going and help their team to a big score.

The Australian bowlers did a good job of restricting the hosts to a low score. Josh Hazlewood was the pick of the bowlers as he picked three wickets for 24 runs in his four overs. Mitchell Starc took two wickets for 33 runs in his four overs while Adam Zampa and Andrew Tye picked one wicket each in their respective overs. However, in the end, the target proved too much for the Australian batters.

Not a single player apart from Mitchell Marsh could get going for Australia. Both openers were dismissed cheaply, forcing Marsh to try and hold the fort. He did an incredible job as he scored 45 runs off 45 deliveries. However, there was no one that stayed long enough to support him. Skipper Matthew Wade scored 13 off 23 balls and Starc scored 14 off 14 balls. They were the only other Aussie batters that got into double figures.

Bangladesh’s bowling attack was exceptional. They bowled out Australia for 108 runs and took a 23-run victory. The pick of the bowlers was Nasum Ahmed who took four wickets and conceded 19 runs in his four overs. Mustafizur Rahman and Shoriful Islam also had good performances as they picked a couple of wickets each. Shakib and Mehedi Hasan picked one wicket each.

“We had a team talk during the halfway stage and said that we were 10 runs short, so we have to field well and put in more effort,” skipper Mahmudullah Riyad said after the historic victory.

“That’s what you need while defending low totals and have an attacking mindset. They are a very good side and we need to tick the boxes we failed to today in the coming games,” he added.

“I thought the bowlers did a terrific job to restrict them to 130,” said a dejected Matthew Wade.

“But having lost three for 10, me and Marsh tried to resurrect the innings but unfortunately we couldn’t do that. We have to find ways to score runs on such pitches,” he added.

The second match of the series will be played on Wednesday at the same venue.