US Soccer says women's team has made more than the men 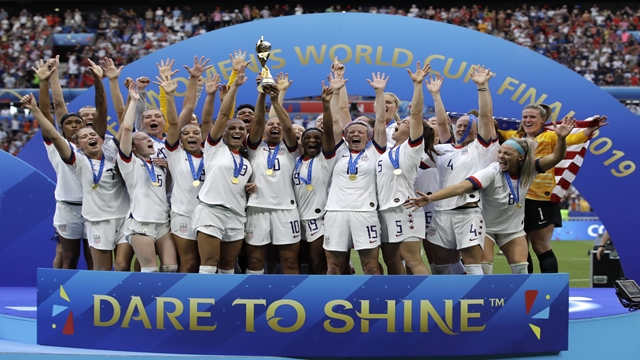 United States' team celebrates with the trophy after winning the Women's World Cup final soccer match between US and The Netherlands at the Stade de Lyon in Decines, outside Lyon, France. photo: AP

According to a letter released Monday by U.S. Soccer President Carlos Cordeiro, the federation paid out $34.1 million in salary and game bonuses to the women between 2010 and 2018 as opposed to $26.4 million paid to the men. The total does not include the value of benefits received only by the women, like health care.

The federation released the figures as it moves toward mediating a federal lawsuit in which players for the women's team accused U.S. Soccer of "institutionalized gender discrimination" that includes inequitable compensation when compared to players on the men's team.

Comparing compensation between the two teams is difficult because the pay structure is based on different collective bargaining agreements. For example, players for the women's team have a base salary while the men are paid primarily based on matches and performance.

"In the weeks ahead, we'll focus on preparing for mediation and resolving this matter in the best interests of the WNT and U.S. Soccer. I want you to know that U.S. Soccer is committed to doing right by our players, and I've been encouraged by the public comments from players expressing their desire for a cooperative approach. I remain optimistic that we can find common ground," Cordeiro wrote. "Together, I believe we can get this done."

Molly Levinson, a spokeswoman for the players in matters involving the lawsuit, called the letter "a sad attempt by USSF to quell the overwhelming tide of support the USWNT has received from everyone from fans to sponsors to the United States Congress.

Cordeiro said the federation recently conducted an extensive analysis of its finances over the past 10 years, seeking to clear up what he called confusion based on the pay structures for both teams.

U.S. Soccer said it pays the women's national team players a base salary of $100,000 per year, and an additional $67,500 to $72,500 per player as a salary for playing in the National Women's Soccer League. The women also have health care benefits and a retirement plan.

Players on the men's national team are paid by training camp call-ups, game appearances and through performance bonuses. The federation acknowledged the men have the ability to earn higher bonuses than the women. The men's team did not make the field for the 2018 World Cup in Russia, while the women have won back-to-back World Cup titles.

The collective bargaining agreements are not made public, and U.S. Soccer did not provide details about the men's bonus structure.

The analysis did not include prize money for tournaments like the World Cup, because those funds are determined by FIFA, soccer's international governing body, and not U.S. Soccer.

The letter comes amid increasing pressure on U.S. Soccer in the wake of the women's victory at the World Cup earlier this month. After the United States defeated the Netherlands in Lyon, France, the crowd at the stadium chanted "Equal Pay! Equal Pay!"

During the World Cup, more than 50 members of Congress also sent a letter to U.S. Soccer "to express our disappointment of the inequities in pay, publicity, and investment that the U.S. Women's National Team (USWNT) has continued to face."

Sen. Joe Manchin of West Virginia introduced a bill that would withhold federal funding that would go toward hosting the 2026 men's World Cup until the issue was resolved.

Procter & Gamble, a sponsor of the team, said this month it would donate $529,000 — $23,000 for each of the 23 players on the U.S. team that won the World Cup — to the U.S. Women's National Team Players Association to help close the pay gap. The company took out a full-page ad in The New York Times urging U.S. Soccer to "be on the right side of history."

Cordeiro said in the letter that the federation decided to focus on winning the World Cup rather than debate the lawsuit.

"Now that the Women's World Cup is behind us, a common understanding of key facts will also help advance our shared work to grow women's soccer in America as well as the larger national discussion about equality," he wrote.

Levinson maintains the figures provided by U.S. Soccer are misleading.

"The USSF fact sheet is not a "clarification." It is a ruse. Here is what they cannot deny. For every game a man plays on the MNT he makes a higher base salary payment than a woman on the WNT. For every comparable win or tie, his bonus is higher. That is the very definition of gender discrimination," Levinson said in a statement. "For the USSF to believe otherwise, is disheartening but it only increases our determination to obtain true equal pay."