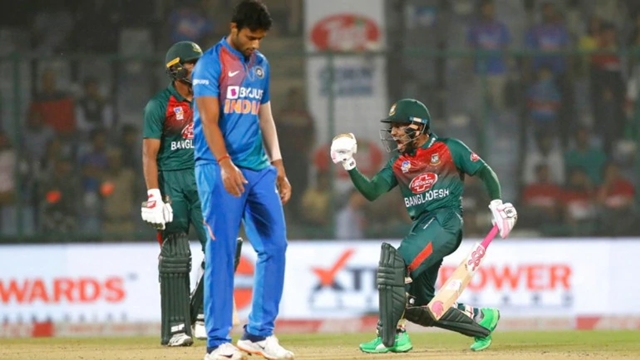 Mushfiqur Rahim has guided Bangladesh to a resounding seven-wicket victory over India with a quickfire half-century in the first Twenty20 International of a three-match series in New Delhi.

The wicketkeeper-batsman smashed an unbeaten 60 off 43 as the Tigers crossed the target of 148 with three balls remaining to clinch their first T20I win over India at the Feroz Shah Kotla Stadium on Sunday.

He confirmed his fifth T20I fifty and fended off the pressure of getting 22 runs in the last two overs by hitting four consecutive boundaries off the 19th over by Khaleel Ahmed.

He had Mahmudullah, who is leading the T20 squad after Shakib Al Hasan was banned last week for breaching corruption code, to finish off the chase with a six, his second in 15-run innings off 7 balls, in the third ball of the next over by debutant Shivam Dube. He was in for injured Hardik Pandiya. India was also without “finisher” Jasprit Bumrah.

Before the 40-run stand with Mahmudullah, Mushfiqur teamed up with opener Soumya Sarkar (39 off 35). When Soumya was bowled by Khaleel in the 17th over the 60-run stand under pressure ended and the required run rate was edging higher.

Mushfiq, who seemed to be in mission to bury down the ICC World T20 stigma that was labeled against him for failing to take the team over the rope in Bangalore, made no such mistake to create history in Delhi with his match-winning knock.

Mushfiq demonstrated a superlative batting display to make sure that the host does not get the chance to crawl back in the game.

Mohammad Naim Sheikh supported Soumya earlier after the debutant was put to bat at one down but was caught by Shikhar Dhawan at long leg while trying to slog Yuzvendra Chahal in the eighth over.

Almost everything went well for Bangladesh after the setback of losing opener Liton Das in the first over as senior opener Tamim Iqbal had pulled out of the tour to be with his wife who is expecting their another child.

All-rounder Shakib’s absence was not felt much when Bangladesh bowled either. Pacers Aminul Islam and Shafiul Islam helped the Tigers bind the hosts to the humble total by taking two wickets each.

India could have scored even less had Shikhar Dhawan not played a much needed 41-run innings with one six and three fours.

A quickfire 28-run unbeaten partnership with three sixes between Krunal Pandya and Washington Sundar also helped the hosts' cause.

Shreyas Iyer hit the two other sixes of the innings before being caught by Naim off Aminul in the 11th over.

Earlier, Aminul sent back KL Rahul when he came into the attack in the seventh over.

Shafiul struck first by taking the wicket of captain Rohit Sharma after Mahmudullah won the toss and opted to field first.

The pacer also claimed the last wicket of the innings stopping Rishabh Pant on 27 off 26 in the second ball of the 19th over.

Bangladesh cricketers wore face masks in training and complained of sore throats as air pollution in the city hit its worst level this year but Mahmudullah had said they were not too perturbed.

India earlier won all the eight T20 matches against Bangladesh, but now will face the tourist to save the series when the two sides will meet in the series-deciding match at Rajkot on November 7. 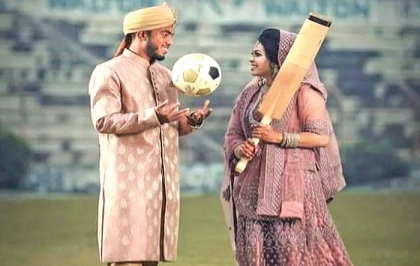