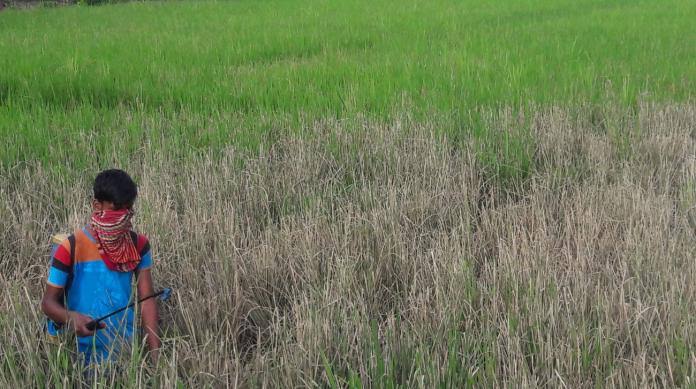 Farmers in Cox's Bazar district planted BR-28 paddy in 20,000 hectares of land in the current boro season. The yield was bumper and they were set to harvest the paddy within the next 10 – 15 days.

But Majra Poka (a type of rice bug) has attacked the paddy fields, with the farmers now fearing huge financial losses.

"We prepared seedbeds and took other necessary measures for the next three months by spending Tk50,000 more. We were hopeful despite the outbreak of Covid-19 as we had a bumper harvest. But now we are hopeless because of the bugs," said Abu Syed.

Another farmer, Morhsedur Rahman, said, "As there was no monitoring by the local agro officials, the farmers grew seeds which do not match with the local climate."

Without any experiment, it was a wrong decision to sell those saplings among the farmers, he added.

The farmer families are worried about the consequences as they cannot harvest the paddy amid the shut-down for preventing Covid-19 outbreak.

Another farmer Abu Syed of local Mono Para said that the bugs damaged paddy on at least 50 acres of land including two acres of Omar Hakim – an irrigation pump owner adjacent to Rakhainpara of Khurushkul, and one acre of Saifullah Nur of Fakirpara.

"In my area, around 50-60 acres of land have been affected by bugs. We also were informed about the damage in some other areas. If the loss is one lakh per acre, it may cross crore," said Jasim Uddin, chairman of Khurushkul union parishad.

Sources from the Department of Agriculture Expansion (DAE) in Cox' Bazar said BR-28 paddy was planted in around 20,000 hectares of lands in Cox's Bazar.

In a short time, the rice production was huge. Farmers - who knew rules - used pesticides, and were not affected by the bugs.

"The rice from BR-28 paddy is tasty and takes a short time for cultivation. But since there are some maladjustments with the environment, the farmers feel discouraged to plant it," said Abul Kashem, deputy director of Cox's Bazar DAE.

However, many farmers planted this variety and those who followed guidelines, they would prevent the bug attack but those who ignored would face losses, he added.

"We have sent officials to visit the areas where the bugs have attacked," said Kashem.

"We have also told the farmers to spray certain types of pesticides," said the DAE official.