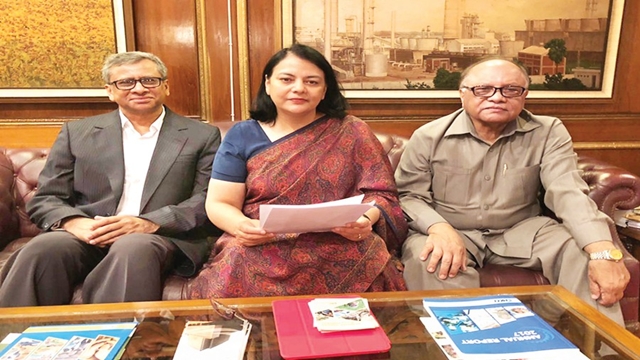 Attaining the increased revenue target for the new fiscal will continue to be a major challenge, despite a rise in the number of tax payers, said a leading chamber.

The National Board of Revenue (NBR) will be targeting Tk 2.96 trillion in tax revenue for fiscal year 2019, which is 31.64 per cent higher than the revised one of Tk 2.25 trillion of the outgoing fiscal.

The Metropolitan Chamber of Commerce and Industry (MCCI), Dhaka, has suggested new avenues of tax collection instead of tax burden for the compliant enterprises.

The government should set the inclusion target of new tax payers' number for each of the tax officials and reward them for enrolling fresh taxpayers, the chamber added.

The chamber's suggestions came while giving its post-budget reaction on Friday.

The MCCI expressed it disappointment over the continuation of 35 per cent for the majority of the corporate sector.

Despite repeated requests and assurances over the years, the corporate tax was not reduced, it said.

"This rate is among the highest in the region," the chamber said in a statement.

The MCCI, however, hailed the reduction of the tax rates for banks, insurance and financial institutions by 2.5 per cent.

The trade body also expressed its disappointment over the continuation of the tax-free threshold for individual income.

The chamber said this threshold has not been changed for the last three years although the inflation has been increasing.

The MCCI referred to the 'employment-led growth' model in the national planning.

Though the country has officially adopted the new idea, it is difficult to see a reflection of it in the proposed budget, it said.

The shrinking number of new jobs despite high Gross Domestic Product (GDP) growth is a major a concern, the chamber said.

It has not been addressed in the budget, the trade body said.

The MCCI also felt that certain things need to be prioritised. These include policy reforms, simplification of taxation system, business-friendly policies, policy continuation, and ease of doing business.

"We feel that as time progresses the GDP growth will rise further. The country has started showing encouraging signs with higher demand for investment credit," the chamber said.

It, however, laid emphasis on paying special attention to inflation in the new fiscal year and taking measures to contain it.

The trade body noted although Bangladesh's economy is progressing, it is below the country's true potentials.

The chamber said inadequate infrastructure and shortage of power and energy are also the key impediments to the growth of the economy.

The MCCI said, "There is no alternative to raising the level of private investment if Bangladesh wants to confirm the status of a developing country by 2021."

The MCCI urged the government to take necessary measures to ensure efficient and effective spending of the ADP funds.

It hailed the higher allocations for the human resources sector.

This will help improve the quality of people's lives and create better employment opportunities, it added.

The trade body said they appreciated the continuation of the special supervision of the Prime Minister for rapid implementation of 10 mega projects.

"However, proper utilisation of allocated resources and their timely completion should be ensured."

The MCCI appreciated some measures like one stop service and economic zones for investors for improving the ease of doing business.

But it said the benefits of these measures will only be effective if they are implemented in a timely and effective manner.

The MCCI suggested further specific budgetary provisions for employment generation, skill development and up-skilling of women in the workforce.

"We appreciate the tax incentive for green factories in the RMG sector, but we strongly urge upon the government to extend equal treatment across all industrial sectors," it said.

The chamber appreciated the government has decided to withdraw VAT on the sale of agricultural land.

The MCCI, however, expressed its frustration over reforming the state-owned enterprises (SoEs).

No reforms have been proposed to correct the deficits of SOEs or the non-performing loans of the state-owned commercial banks (SCBs), it said.

"On the contrary, the budget proposes to continue the financing of SoEs' deficits and capital shortfalls in SCBs through budget transfers," the chamber said.

"This is an 'unjustified burden' on the taxpayers. It encourages inefficient practices."

The chamber appreciated the exemption from import VAT given to some raw materials of medicines in the industrial sector.

The proposed 5.0 per cent VAT on e-commerce should be removed, suggested the chamber.

It also pleaded for lifting VAT on ride-sharing services like Uber and Pathao, which address the transport needs of the general public.

The MCCI appreciated that the government has decided to take some measures to bring discipline in the financial sector.

However, it has urged the government to implement these measures in a timely manner.

The MCCI criticised the increase of the VAT to 5.0 per cent from the current 4.0 per cent for the supershops.

The MCCI congratulated the finance minister on presenting his 10th consecutive and overall 12th national budget to National Parliament.