Emmys open with politics on the mind 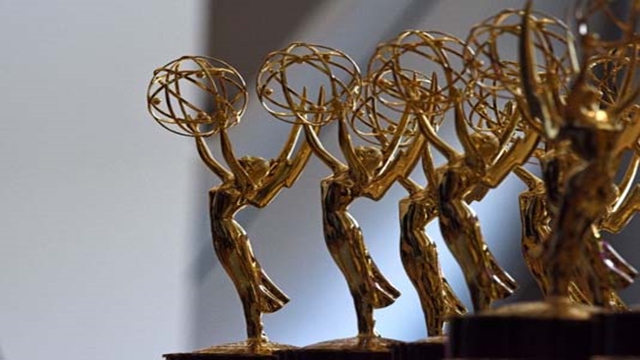 The 70th Emmy Awards, television’s equivalent of the Oscars, opened Monday with an edgy flurry of jokes about diversity in Hollywood, Donald Trump, race and the pervasive issue of sexual harassment in the entertainment industry.

“Saturday Night Live” nominees Kate McKinnon and Kenan Thompson led a group of actors including pop stars John Legend and Ricky Martin — and even RuPaul — in the amusing song-and-dance number touching on the hot-button issues.

They then yielded the stage to hosts Colin Jost and Michael Che, who are also regulars on the veteran NBC comedy sketch show — and let the zingers fly.

“This year, the audience is allowed to drink in their seats. Hope you’re excited about that — because the one thing Hollywood needs right now is a bunch of people losing their inhibitions at a work function,” Jost said to hearty laughs.

In describing “The Handmaid’s Tale,” one of the evening’s top nominees, Che said the Hulu show “takes place in an imaginary future where an entire group of people is violently forced to work and make babies against their will.”

Others in the best drama race include FX spy thriller “The Americans,” HBO’s futuristic western “Westworld,” Netflix favorites “The Crown” and retro sci-fi mystery “Stranger Things,” and NBC family saga “This is Us.”

The first awards of the night went to sentimental favorite Henry Winkler – the Fonz himself — for best supporting actor in a comedy for “Barry,” and to Alex Borstein for Amazon’s “The Marvelous Mrs Maisel.”