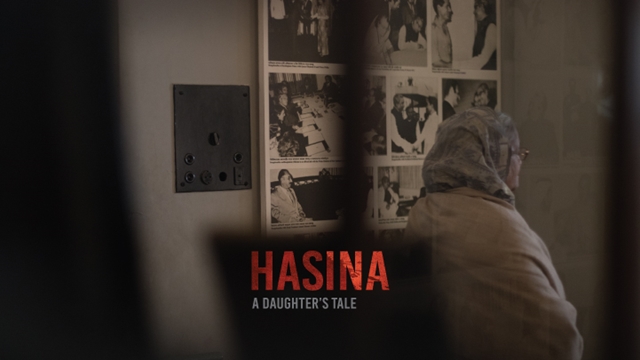 ‘Hasina: A Daughter’s Tale’, a docufilm based on the life and struggle of Prime Minister Sheikh Hasina, received huge viewers’ attention as it was screened at the 10th Jagran Film Festival here on Saturday.

The hall number-4 of Siri Fort Auditorium, a premier multi-auditorium complex of Indian government, witnessed a pin drop silence for 1.10 hours when the film was screened before a large number of viewers.

Many viewers were seen wiping their eyes as tears rolled down on their cheeks when Sheikh Hasina and her younger sister Sheikh Rehana narrated how brutally Bangabandhu, along with most of his family members, were assassinated on August 15, 1975.

The film directed by Poplu Khan also features the struggles which Sheikh Hasina and Sheikh Rehana, the two surviving daughters of Father of the Nation Bangabandhu Sheikh Mujibur Rahman, had to endure after the tragic episode of Bangladesh’s history.

“I am completely moved by the film as I have learnt something new about Bangladesh especially the lives and struggles which Sheikh Hasina and Sheikh Rehana had to endure to find out the truth and how Bangabandhu was killed brutally,” said Gautam Sen, a hydro-carbon exploration expert.

“I couldn’t check my emotion…how Sheikh Hasina and Sheikh Rehana survived in various adverse situations after 1975 and took refuge in India…I wonder how they lead normal lives by overcoming the trauma,” he added.

He opined that the film should be screened in more places across the world so that people could know the real history of Bangladesh and lives and struggles of the two daughters of Bangabandhu, who sacrificed his live for the cause of an independent Bangladesh.

Rahul Kathuria, one of the organizers of the festival, said the film ‘Hasina: A Daughter’s Tale’ got huge public responses and for that we have decided to screen the film in more places including Lucknow during the festival.

The festival, an initiative by the Jagran Prakashan Group towards creating a culture of cinema appreciation, would be held in 18 cities across India from July 18 to September 29. Over 400 films would be screened along with holding 18 cinema appreciation workshops there during the event.

‘Hasina: A Daughter’s Tale’ is a joint production of Radwan Mujib Siddiq and Nasrul Hamid Bipu of Center for Research and Information (CRI) and Applebox Films. The 70-minute docufilm was released worldwide on November last year.