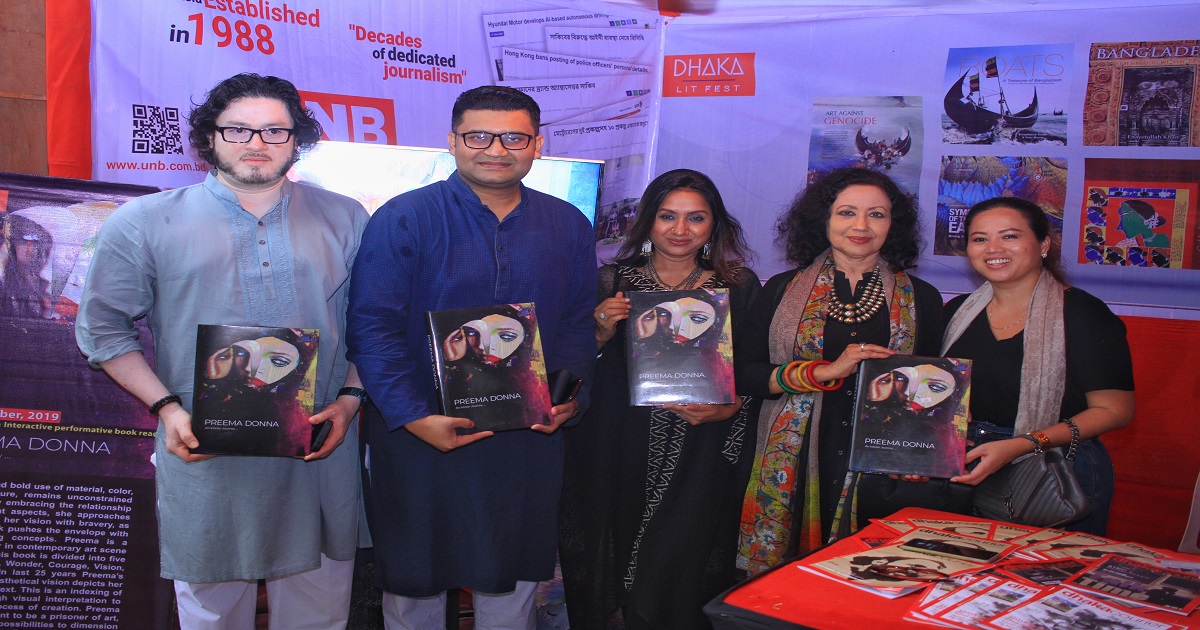 November rain could not wash away the joy of celebrating global literature on the second day of the Dhaka Lit Fest.

On Friday, a weekly holiday in Bangladesh, the crowd appeared to be undeterred by the rain, making the festival feel more crowded.

The extravaganza of the day started with spiritual Christian Choir at the lawn, and two tremendous performances for children took place at the first slot in the Cosmic Tent and Nazrul Stage.

At Bangla Academy’s AKSB auditorium, William Dalrymple discussed the occupation of Bengal by East India Company which took place. "Founding of East India Company was seemingly the birth of capitalism, which, since its beginning locked steps with colonialism," he said at the session titled ‘The Anarchy’.

He said East India Company “is the origin everything we fear about big corporations now".

Complementing his take on the colonial British Empire, another session of Dalrymple focused on the art structure during the occupation of India at the cosmic tent shortly afterwards, titled ‘Forgotten Masters’.

This year’s DLF has a performer named Zohab Zee Khan - the Australian Poetry Slam Champion poet and hip-hop artist who can pump up the crowd within seconds with his word-magic. Other prominent poets, including Kaiser Haq, Kamal Chowdhury and Tishani Doshi, also recited their poems.

As part of one of the most hyped sessions in Dhaka Lit Fest, a discussion took place on Friday commemorating the works of Bangladesh’s founding father Bangabandhu Sheikh Mujibur Rahman and his role as a phenomenal leader of the postcolonial era.

The session was moderated by ULAB’s Pro-VC Shamsad Mortuza. Being the prolific speaker that he is known for, Tharoor reflected on the vitality of Bangabandhu's leadership after partition.

“The original postcolonial liberators had the advantage of fighting for freedom from a foreign power... [but] in the case of Sheikh Mujib, he had already witnessed that moment of liberation. The foreigners were gone ... he became the first leader in the postcolonial system to interrogate what identity it meant and to do so through enormous struggle," he said.

He further mentioned that during the term as Prime Minister, Sheikh Mujibur Rahman articulated the four pillars of the state very well to guide the nation.

“He had a tremendous ability to move people with his oratory, his language. He had a vision,” said Shashi Tharoor.

Afsan Chowdhury noted that since partition, Bangabandhu sought for a state free from all kind of oppression and added that Bangabandhu “was never loyal to Pakistan”. He mentioned that Bangabandhu realised the power of peasantry of Bengal region very well and won them over with his leadership.

"Sheikh Mujib was not interested in any other region, he just wanted a Bengal region of what he saw a peasantry region," he said. "In 1947, Pakistan comes into being. In 1948, the first strike against Pakistsn was called. If Sheikh Mujib was pro-Pakistan, then he'd have never called the strike," he added.

Poet Kamal Chowdhury highlighted the contributions of Bangabandhu in rebuilding the country after liberation saying "Bangabandhu's whole life is an epic tale". He also credited the great leader for the founding of the first state-driven by nationalism.

As Dhaka Lit Fest is known for being an open hub to portray the best of culture in Bangladesh by Bangladeshi artists, three mesmerising performances at the Nazrul Stage literally stole the hearts of the admiring crowd in the rainy Friday. The morning was tantalised by country’s first-ever all-female indigenous rock band F Minor, The afternoon was majestic because of the heavenly presentation by the unique Bengali team Ghashphoring Choir along with singer Rezaul Karim Leemon, and the evening was full of positivity with the songs of love and ‘Humanity’, by Shayan.

All these musical acts are led by female vocalists. Shining through the sphere of performing arts, one particular Bangladeshi artist genuinely proved herself. ‘Preema Donna – An Infinite Journey’, the book of prominent Bangladeshi visual artist Nazia Andaleeb Preema who represented Bangladesh at La Biennale di Venezia this year, was unveiled at the Dhaka Lit Fest on Friday.

Published and produced by Cosmos Books, the book is divided into five chapters, depicts Preema’s artistic journey of two decades. “This publication is my inspiration to be more committed towards my intense journey of creativity,” said Preema.

The celebration of the lives of successful women was also vibrantly present and continued at the AKSB auditorium from 4pm till the ending of Day two at 8pm. The first session started with this year’s special guest Monica Ali, who described her whole journey ‘Beyond Brick Lane’ along with moderator Sadaf Saaz, the director of DLF.

Monica shared her story of being a Bangladesh-born writer in the UK and her detailed, broader vision for the next generation of women around the world, who the Pulitzer-nominee writer believes would not get themselves confined under any aristocracy or circumstances.

The day ended with the much-acclaimed screening of the docu-film made on Prime Minister Sheikh Hasina’s life.

Director Piplu Khan sat down after the screening to elaborate the narrative vision of the film along with its music director Debajyoti Mishra, a composer and musician from Kolkata, and Radwan Mujib Siddiq, trustee of Centre for Research and Information, a prominent research and advocacy institute in Bangladesh and the docudrama’s producer association.

The speakers specified their experiences about working on this docudrama and the journey. Session moderator Anjum Katyal was from Kolkata.

Hasina was portrayed in the docudrama as the common man’s leader whose life had no possible way to regain the beauty of living, once her whole family got brutally murdered. She bounced back and took the mantle of power but she is not above human. Sheikh Hasina is a wonderful human being and loving lady, and this film was a tribute to her courage and simplicity, the speakers said.