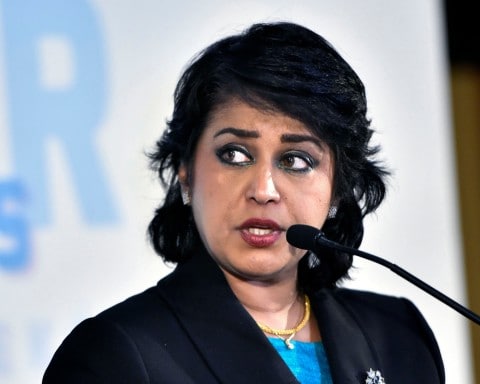 Mauritius President Ameenah Gurib-Fakim resigned on Saturday after being embroiled in a scandal over her use of a credit card to buy luxury personal items, in an abrupt change of heart after vowing she would not stand down.

Gurib-Fakim, Africa's only female head of state, submitted her resignation in the "national interest," her lawyer Yousouf Mohamed told reporters.

He said her resignation would take effect on March 23, a move that will bring down the curtain on a saga that has gripped the Indian Ocean archipelago for weeks.

Gurib-Fakim had vowed to fight the accusations that first appeared in local newspaper L'Express -- that she used a bank card provided by an NGO to make personal purchases, including jewellery and luxury goods worth at least 25,000 euros.

Prime Minister Pravind Jugnauth announced a week ago that Gurib-Fakim had agreed to resign, with a date set for her departure after last Monday's ceremony celebrating the Indian Ocean archipelago's 50 years of independence.

But on Wednesday, a statement from the presidency lashed out at "weeks of attacks and false allegations" and said Gurib-Fakim planned to clear her name and would not go.

It is not clear what prompted her about-turn, but her lawyer said Saturday she was "relieved" she had made the decision to resign after enduring a "difficult" time in recent weeks.

Gurib-Fakim, whose role is mostly ceremonial, is a scientist and biologist of international renown, and in 2015 joined the London-based Planet Earth Institute (PEI) to try to develop scientific capacity in Africa.

The presidency said that in May 2016, she received a credit card from PEI to pay for travel and logistical expenses linked to her role but inadvertently used it for unrelated personal expenses.

Gurib-Fakim said she immediately informed the PEI and paid back the amount, as well as all expenses paid by the PEI for her missions.

This was confirmed by the PEI, which said in a statement earlier this week that Gurib-Fakim "thus never received gifts, favours, wages or expenses from the PEI, nor undue benefits or advantage".

An investigation by L'Express detailed the purchase of a laptop in September 2016, clothes, shoes and jewellery in October, more jewellery in November and luxury clothing in December.

However it was not just the expenditure that provoked anger in Mauritius, but the president's association with Angolan billionaire Alvaro Sobrinho who helped found the PEI and is himself being investigated in Switzerland and Portugal for suspected fraud.

In 2017 he received permission to open an investment bank in Mauritius, prompting allegations of favouritism on his behalf.

Gurib-Fakim, under pressure from the opposition, resigned shortly afterwards from her role at the PEI. afp