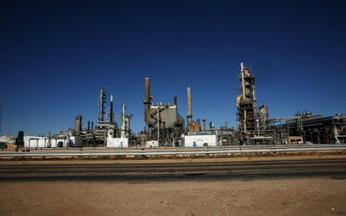 Boosted by surging output, the United States is becoming a significant exporter of crude oil, a shift that is remaking American infrastructure and altering the global petroleum market.

Now pumping more than 10 million barrels per day, the US has become the second biggest oil producer in the world behind Russia and ahead of Saudi Arabia. The bounty is the result of the shale oil boom due to new drilling and production techniques.

Eyeing this jump, the US at the end of 2015 scrapped its embargo on exports, a policy in place since the 1970s oil shocks. Energy companies have seized on the opening, exporting 1.1 million barrels per day to 37 countries in 2017.

Canada is the leading destination of American crude, but the US has also been exporting more to Asia, long a major market for the Organization of Petroleum Exporting Countries (OPEC) and Russia.

China is the second biggest market for US exports, data shows.

But the US remains a major importer of crude oil, in large part because American oil refineries are not designed for the lighter- weight crude that comes out of shale fields. Rather, many plants are built to run on heavier oils from Canada, Mexico or Venezuela that are cheaper to procure and result in lofty profit margins after they are processed into gasoline.

"The choice was made to invest in a more expensive, more sophisticated refinery that is a lot more costly to run, with the view that you are getting crude oil to a discount," said Harry Tchilinguirian, senior oil market strategist at BNP Paribas global markets.

"Considering that it takes five to seven years to build a refinery, you cannot just switch."

Prior to the shale boom, which dates to 2010 or 2011, the US had been planning new pipeline capacity to allow greater crude imports from Canada. But the shift in the US oil production picture has also altered the outlook for energy infrastructure.

US companies are now focusing on adding domestic pipelines and export terminals in the Gulf Coast region to ship American oil abroad.

In this context, President Donald Trump's idea of "energy dominance" or "the golden era of American energy" means not only reducing the role of imports, but "also being able to actively capture market share abroad," he said.

Perhaps the most emblematic project is the reinvention of the Louisiana Offshore Oil Port, the only terminal in the US capable of servicing supertankers. The facility was used for oil exports instead of imports for the first time in February.

Farther west, the port of Corpus Christi, Texas is expected to become a bigger venue for crude exports and plans a $327 million project to widen and deepen the port's channel.

Experts think US oil exports could grow to as much as four to five million barrels a day in the medium term, prompting questions on which markets will buy the additional oil.

In the near-term, John Coleman of consultancy Wood Mackenzie expects much of the crude to reach Europe, given the compatibility of the oil with the continent's refineries.

But beyond 2022, the outlook is cloudier, in part because of new refineries coming on line in Africa and the Middle East, thus limiting their exports.

If the US manages to keep the price competitive enough to compensate for the extra time and cost of transportation, it could turn to Asia.

The question of oil infrastructure in the US "is still very much up in the air," Coleman said. "It's the hot topic of the day, even though there are substantial investments that have been announced, there are more needed." afp