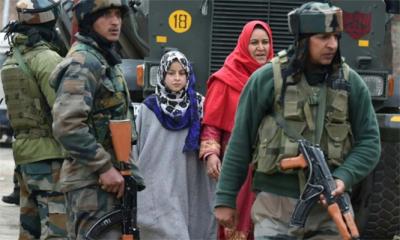 Five members of a single family were killed Sunday when a mortar bomb fired by Pakistani soldiers landed on their home in Indian-administered Kashmir, police said.

The incident happened in the southern Poonch sector in the disputed Himalayan region.

Police said a 35-year-old man, two children aged seven and 12, a teenage boy and a woman were killed.

"The five were killed inside their home when a shell fired from Pakistan side of the border hit it," director general of police, Shesh Paul Vaid said.

Two girls, including a five-year-old, were injured and taken to hospital, a police statement said.

Kashmir has been divided between India and Pakistan since the end of British colonial rule in 1947. Both claim the former kingdom in full and have fought two wars over it.

There have been intense skirmishes this year along the de facto border, known as the Line of Control.

Last month more than 1,000 villagers were evacuated to safer places in the northern Uri sector amid a heavy exchange of fire.

Tensions are already high after India and Pakistan last week accused each other of harassing diplomats in New Delhi and Islamabad.

Islamabad denies the allegations, saying it only provides diplomatic and moral support to Kashmiris seeking the right to self-determination.

India deploys hundreds of thousands of soldiers in the territory, where rebels demand either independence or a merger with Pakistan. afp