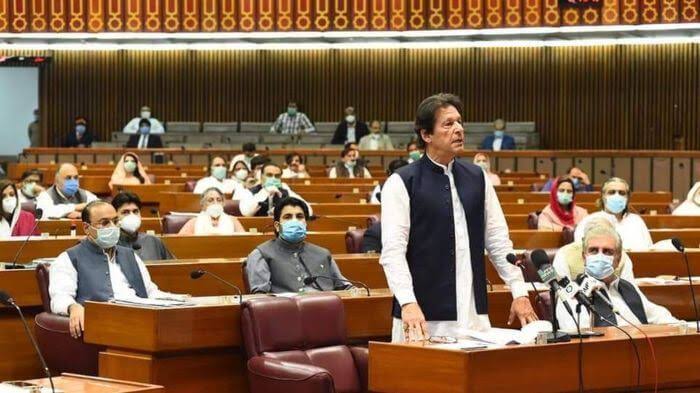 Just a day after the United States called out Pakistan as one of the "safe havens", Pakistani Prime Minister Imran Khan on Thursday called al Qaeda chief Osama bin Laden a 'shaheed' or martyr.

PM Khan was speaking in the national assembly, elaborating how Pakistan has been humiliated across the world despite having sacrificed lives in the war against terrorism.

"The way we helped America in the 'war on terror' and the humiliation that my country had to face. I don't think there has ever been any other country that supported war on terror and had to face criticism from them. If they are not successful in Afghanistan, Pakistan is held responsible for that too. Openly," PM Khan told the National Assembly in a widely-circulated video.

Imran Khan, who had described his foreign policy as his government's biggest achievement, then went on to relate two instances when he said, people of Pakistan were deeply embarrassed.

"One was when Americans killed Osama bin Laden in Abbottabad. Shaheed kar diya (was martyred). But what happened after that. The entire world hurled abuses at us. Our ally (US) entered our country and killed someone without even telling us. It was a big humiliation," Khan said, before going on to describe the drone attacks on Pakistan as the second set of incidents that embarrassed the country.

Osama bin Laden was killed in a military operation by US Navy Seals in 2011 at the Garrison town in Abbottabad.

Imran Khan's description of Osama bin Laden as a 'shaheed' set social media abuzz as soon as a video of his remarks got out.

Imran Khan was immediately panned by the opposition leaders from the Pakistan Muslim League-Nawaz and Pakistan Peoples Party.

"Remember that Osama Bin Laden can be the PM's hero but not the nation's. He was and will remain a criminal of the state and the people," PPP's Senator Sherry Rehman said, adding that Imran Khan's words will go down in history.

According to a report in Dawn, Asif said Osama bin Laden "brought terrorism to our lands, he was a terrorist through and through and he [PM Khan] calls him shaheed?"

There has been no clarification from Imran Khan, who has been seen to defend Osama bin Laden in the past. Like when he was reported to have argued that one person's freedom fighter could be another's terrorist.

Indian diplomat Vidisha Maitra had pointed to such statements from PM Khan in the United Nations General Assembly when she took the prime minister to the cleaners.

Putting the spotlight on Pakistan's track record of supporting and creating terrorists, she asked PM Khan if he would deny that "he was an open defender of Osama bin Laden".

Khan has made repeated controversial statements over the years, including during a trip to the US in 2019 when he claimed the ISI provided Washington with a lead that helped them find and kill bin Laden, according to news agency AFP.

The cricketer-turned premier has long been criticised by opponents for overly sympathising with militants, with rivals once dubbing him "Taliban Khan".

Imran Khan's remarks on Thursday came just a day after the United States State Department called out Pakistan for its continuing support to terrorists targeting India and Afghanistan.

In its report that classified Pakistan as a safe haven for terrorists, the state department underlined that Jaish-e-Mohammad founder Masood Azhar and 2008 Mumbai terror attacks mastermind Sajid Mir were "widely believed" to be living "under the protection of the state" in Pakistan.

The report had mirrored concerns expressed by New Delhi on numerous occasions about Pakistan's complicity in sponsoring, promoting or supporting terrorists operating from its territory.