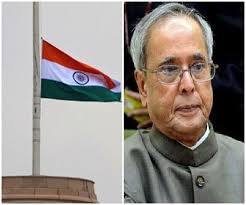 India has announced a seven-day state mourning after the country’s former president Pranab Mukherjee died at a Delhi hospital on Monday. He was 84-years-old.

“As a mark of respect to the departed dignitary, seven days State Mourning will be observed throughout India from August 31 to September 6,” BJP-led Indian government said in a statement.

During the period of state mourning, the national flag will fly at half-mast at all buildings throughout the country wherever it is flown regularly and there will be no official entertainment, reports Hindustan Times.

Prime Minister Narendra Modi on Monday expressed grief over the demise of former President Pranab Mukherjee and said that he has left "an indelible mark on the development trajectory" of the country.

In a series of tweets, PM Modi said that Mukherjee was an outstanding Parliamentarian, adding that he has "made long-lasting contributions in key economic and strategic ministries".

"India grieves the passing away of Bharat Ratna Shri Pranab Mukherjee. He has left an indelible mark on the development trajectory of our nation. A scholar par excellence, a towering statesman, he was admired across the political spectrum and by all sections of society," PM Modi tweeted.

"During his political career that spanned decades, Shri Pranab Mukherjee made long-lasting contributions in key economic and strategic ministries. He was an outstanding Parliamentarian, always well-prepared, extremely articulate as well as witty," PM Modi said in another tweet.

The government has not yet announced the date, time and venue of the state funeral.