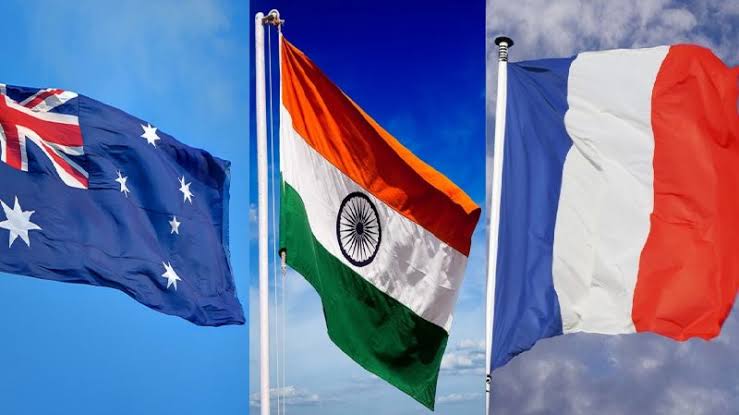 India, Australia and France on Wednesday held talks for the first time under a trilateral framework with focus on enhancing cooperation in the Indo-Pacific, a region that has been witnessing increasing Chinese military assertiveness.

“The focus of the dialogue was on enhancing cooperation in the Indo-Pacific Region,” the external affairs ministry said in a statement.

It said the “outcome-oriented” meeting was held with the objective of building on the strong bilateral ties that the three countries share with each other and synergise their respective strengths to ensure a peaceful, secure, prosperous and rules-based Indo-Pacific Region.

The MEA said that the three sides have agreed to hold the dialogue on an annual basis.

It said the three sides discussed economic and geo-strategic challenges and cooperation in the Indo-Pacific, particularly in the context of the COVID-19 pandemic and domestic responses to the crisis.

“The three countries also had an exchange on the priorities, challenges and trends in regional and global multilateral institutions, including the best ways to strengthen and reform multilateralism,” the MEA said.

The MEA said cooperation on marine global commons and potential areas for practical partnership at the trilateral and regional level were also discussed, including through regional organisations such as ASEAN, Indian Ocean Rim Association (IORA) and the Indian Ocean Commission.

The 10-nation ASEAN is considered one of the most influential groupings in the region. India and several other countries including the US, China, Japan and Australia are its dialogue partners.

The IORA is a regional forum with a focus on enhancing maritime and economic cooperation.