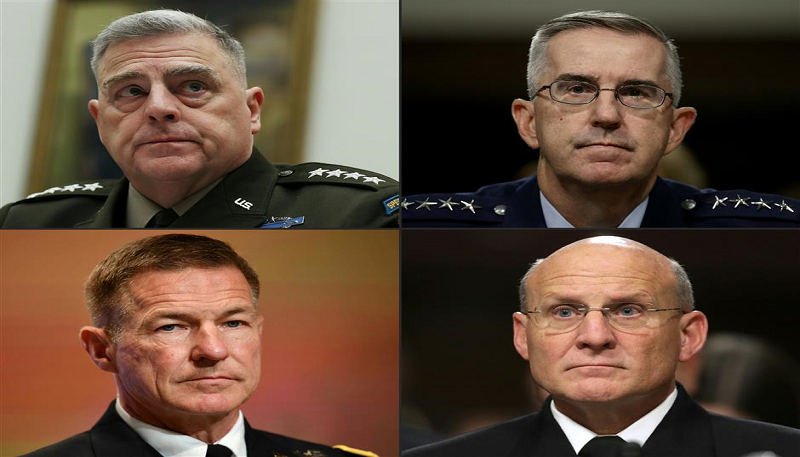 The US commander-in-chief has Covid-19 and the top military brass are isolating as the coronavirus pandemic takes a toll on the national security establishment of the most powerful nation in the world.

As Covid-19 breached the walls of the Pentagon, the Defense Department was quick to stress on Tuesday that there had been “no change to the operational readiness or mission capability of the US Armed Forces.”

US President Donald Trump, custodian of the nuclear codes, tested positive for the coronavirus last week and was hospitalized for three days, returning to the White House on Monday.

No sooner had Trump returned to work than the Pentagon announced that members of the Joint Chiefs of Staff, including General Mark Milley, the chairman, were self-quarantining.

They all tested negative for Covid-19 but would isolate after coming into contact during meetings last week with the vice commandant of the Coast Guard, Admiral Charles Ray, who tested positive for the coronavirus.

The list of those who attended meetings with May read like a Who’s Who of the US military’s top brass.

Also attending meetings with May were General Daniel Hokanson, the head of the National Guard, General John Raymond, chief of the Space Force, and General Paul Nakasone, the director of the National Security Agency and head of US Cyber Command, the official said.

“All have been tested with no positive results to report and none are exhibiting any symptoms,” the official said.

Pentagon spokesman Jonathan Hoffman said those who had come into contact with May would self-quarantine “out of an abundance of caution.”

“We are conducting additional contact tracing and taking appropriate precautions to protect the force and the mission,” Hoffman said.

“Senior military leaders are able to remain fully mission capable and perform their duties from an alternative work location.”

The Coast Guard said Ray had tested positive on Monday after experiencing mild symptoms and was quarantined at home.

Defense Secretary Mark Esper was on a foreign trip last week and was not among the Pentagon officials who are going into isolation.

Esper took part in a conference on the future of the US Navy on Tuesday but did not make any comments about the quarantine situation at the Pentagon.

Senior officials said the US threat level had not been heightened last week following the announcement that the president had Covid-19 and no new threats had been detected.

But former US officials said the administration needed to remain wary.

“We have to look at whether or not any of our global adversaries want to take advantage of the distraction taking place right now,” John Brennan, who served as CIA director under president Barack Obama, said on NPR radio.

“A country like China might try to do something in Hong Kong now, or in the South China Sea, while Trump is focused on his health,” Brennan said.

“(Or Russia) might decide to do something in Belarus or in another country, taking advantage of what they see as a possible opportunity,” he said.

Stephen Hadley, who served as national security advisor to former president George W. Bush, also warned that “adversaries may think that America may be distracted so that they can get away with something.”

Representative Adam Smith, chairman of the Democratic-majority House Armed Services Committee, lashed out at Trump’s handling of the coronavirus crisis and said it had endangered national security.

“While our military can still operate while leadership is quarantined, the national security implications of the president’s recklessness cannot be overstated,” Smith said in a statement. “Our adversaries are always looking for any weakness to exploit.

“President Trump’s pathetic attempts to exude strength aren’t fooling anyone — Americans know he is weak and so do those who wish us harm,” Smith said.

“Instead of leading, President Trump continues to willfully jeopardize the safety and security of the American people and our military apparatus.”