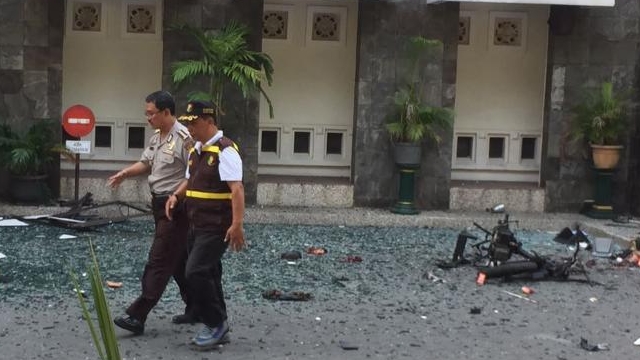 The first attack struck a Sunday Mass at the Santa Maria Roman Catholic Church, killing four people, including the suspected bomber, police spokesman Frans Barung Mangera told reporters at the scene. He said two police officers were among a total of 40 wounded.

It was followed by a second explosion minutes later at the Christian Church of Diponegoro that killed two people. Another two died in a third attack at the city's Pantekosta Church, Mangera said.

One person died in a hospital, bringing the death toll to nine, he said.

The latest attacks in predominantly Muslim Indonesia came days after police ended a riot and hostage-taking at a detention center near Jakarta that left six officers and three inmates dead. The Islamic State group has claimed responsibility.

Indonesia has carried out a sustained crackdown on militants since bombings by al-Qaida-affiliated radicals in Bali in 2002 killed 202 people. In recent years the country has faced a new threat as the rise of the Islamic State group in the Middle East invigorated local militant networks. ap