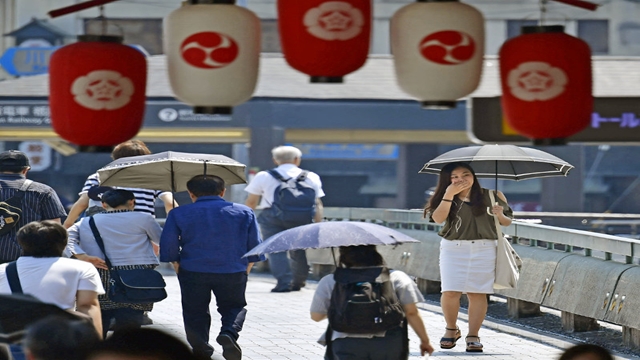 Two weeks into Japan’s blistering heatwave, at least 80 people have died and thousands have been rushed to emergency rooms, as officials on Tuesday urged citizens to stay indoors to avoid temperatures exceeding 40 degrees in some areas.

The government said it may pay to help state schools install air conditioners and suggested extending summer holidays, which started this week for many students. While most schools in Tokyo have coolers, few in rural areas do.

“Record temperatures are continuing across the country and emergency measures to protect students and their well-being has become an issue,” chief cabinet secretary Yoshihide Suga told a news briefing.

Temperatures neared 40 degrees on Tuesday in many cities, just off Monday’s record of 41.1 in the city of Kumagaya northwest of the capital. Temperatures in central Tokyo, where an Olympic stadium is being built, hovered near 35 degrees.

People turned up their air conditioning, driving prices on the Japan Electric Power Exchange to their highest in five years, exchange data showed, the second week that they have hit multi-year highs.

More people are dying from the heat, figures from the Fire and Defence Management Agency (FDMA) show. In the week to July 22nd, 65 people died, versus 12 the previous week and only three in the seven days prior, the FDMA said.

“The elderly make up the vast majority of deaths,” said Fumiaki Fujibe, a researcher in the geography department of Tokyo Metropolitan University.

“About half of the people sent to emergency rooms are over 65, but they account for 80 per cent of the deaths.”

The broiling heat has also fuelled worries for the safety of athletes and spectators at the Tokyo Summer Olympics in 2020.

In its bid documents to host the event, the city described the months of July and August as “having many days of mild and sunny weather” that “provide an ideal climate for athletes to perform”.

But there could be some respite in store.

The heat is expected to ease slightly this week as a high pressure zone responsible for it moves, allowing moist air to bring rain to some scorched areas, the Japan Meteorological Agency said, reports Irish Times.