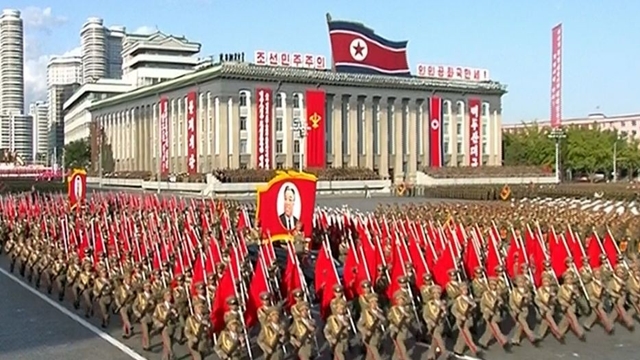 Hundreds of trucks carrying thousands of troops lined a Pyongyang riverbank in the pale light of dawn early Sunday,
as nuclear-armed North Korea prepared to celebrate its birthday with a huge
show of military strength.

Sunday is the 70th anniversary of the 1948 foundation of the Democratic
People’s Republic of Korea, as the North is officially known, three years
after Moscow and Washington divided the peninsula between them in the closing
days of the Second World War.

Such set-piece dates are a mainstay of the North’s political calendar,
particularly when round numbers are involved, and have traditionally been
occasions for showing off its latest hardware.

“Anniversaries are important in the DPRK, and this one is particularly so,”
said Evans Revere of the Brookings Institution think-tank in Washington.

“These celebrations are also occasions for the leader to demonstrate
accomplishments and national power, and to take credit for them.”

The displays — overseen by leader Kim Jong Un, the third member of his
family to rule the country — are crucial to Korea-watchers, who observe them
closely for clues about its latest advances.

First, companies of soldiers goose-step through Kim Il Sung Square, then
the material becomes steadily more intimidating, with tanks rolling past and
aircraft flying overhead, until the programme culminates with
intercontinental ballistic missiles.

But the rockets may not be on show this time, analysts say.

Too militaristic a display could risk upsetting the diplomatic dalliance on
the peninsula, after Kim’s Singapore meeting with US President Donald Trump
in June and his third summit with the South’s President Moon Jae-in due in
Pyongyang later this month.

“If they show off ICBMs it will be a massive provocation and it will be a
slap in the face for the United States,” said Andrei Lankov of Korea Risk
Group.

He did not expect the North to do so, particularly as it would put the
visiting Chinese delegation in the difficult position of appearing to endorse
the weapons programmes that have seen Pyongyang subjected to multiple
international sanctions. 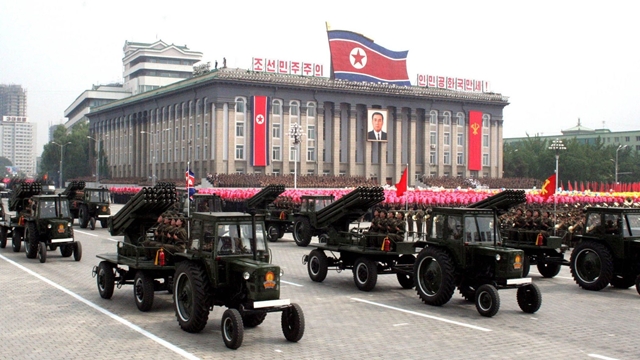 Beijing is its neighbour’s key diplomatic protector and trade partner, and
after years in the deep freeze over the North’s missile and nuclear tests
their ties have warmed rapidly this year, with Kim visiting China three times
to meet President Xi Jinping.

There was speculation that Xi might reciprocate for the anniversary — Hu
Jintao was the last Chinese president to visit in 2005, and the then premier
Wen Jiabao followed suit in 2009.

But instead Xi will be represented by Li Zhanshu, the head of China’s
parliament and a member of the Communist Party’s politburo standing
committee, the most powerful body in the country.

Xi’s decision not to go, but still send a senior envoy, may be calculated
to show backing for Pyongyang while not antagonising Trump as China and the
US are embroiled in a trade dispute.

At the same time it could indicate that Beijing wants to see Kim do more to
reduce tensions before a presidential visit.

Diplomatic invitations for the anniversary have gone out around the world,
but the only head of state known to be attending is Mauritanian president
Mohamed Ould Abdel Aziz.

And French actor Gerard Depardieu is also in Pyongyang.

At a concert on Saturday evening that kicked off the celebrations, the
imagery on display focused heavily on the economy, with only a few short
military segments, none of them showing missiles.

The content of the parade would be key, John Delury of Yonsei University in
Seoul told AFP.

In April Kim declared that the North’s development of nuclear weapons had
been completed and “socialist economic construction” would be the new
strategic priority.

“It’ll be interesting to see if Kim Jong Un does try to change the
symbolism, change the message to essentially diminish the militaristic
message and enhance the economic message,” Delury said.

“That’s what I’m watching for anyway.”