Five things about the North-South summit in Pyongyang 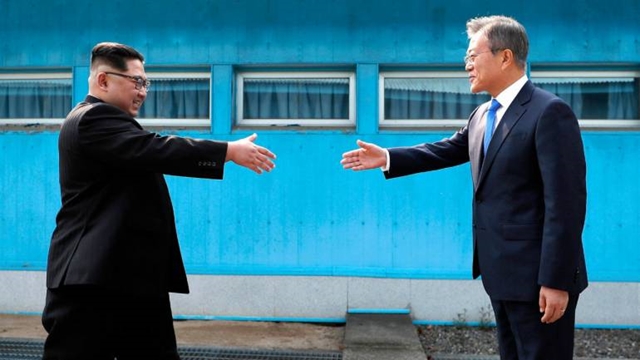 Summits between North and South Korea are closely watched for both spectacular symbolism — on grand display at the Panmunjom summit in April — and smaller hints of meaning.

Tuesday’s meeting between the South’s President Moon Jae-in and the
North’s leader Kim Jong Un — their third so far this year, but the first
time Moon has gone to Pyongyang — was no exception.

Here are five things we have learned so far. 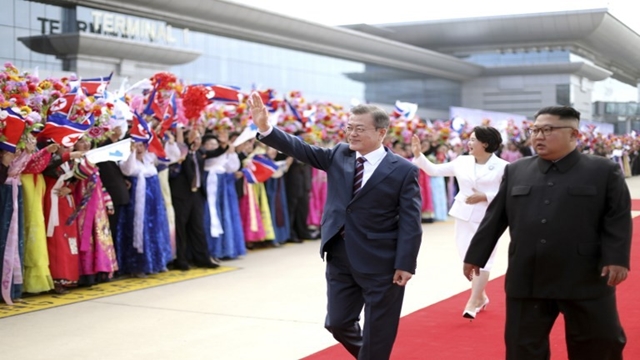 Kim’s younger sister Yo Jong, whom he sent to the South’s Winter Olympics
as his special envoy, has emerged as one of his closest advisers and is
regularly seen at his side at public events. But she is developing a tendency
to stray into shot.

At the first Panmunjom summit, she walked behind Moon and her brother, who
were otherwise alone on the red carpet, until she suddenly peeled away.

And again at Pyongyang airport she briefly joined them on a platform where
they were to watch a welcome ceremony, before drifting into the cameras’
vision several times as the two leaders and their wives made their way past
well-wishers.

All major South Korean television channels carried wall-to-wall coverage
of Moon’s arrival in Pyongyang, showing the airport events live and then
switching to studio commentary and discussion until the next footage
appeared.

But the North’s media is tightly controlled, even when reporting events in
the country itself, and often eschews live broadcasts, preferring to show
recorded footage.

As Kim and Moon embraced on the tarmac the North’s main state television
channel showed only a test card, with eight unchanging vertical blocks of
colour.

The unification flags waved by North Koreans at the airport showed a map
of the peninsula, clearly including Dokdo, islands controlled by Seoul but
claimed by Tokyo.

When similar flags were used ahead of the Winter Olympics in the South,
Japan swiftly protested, and Seoul rapidly came up with an alternative
version without the blue specks.

But Pyongyang is strongly nationalistic and constantly denounces Japan’s
20th-century colonisation of the peninsula and its wartime atrocities.

A weekend commentary on the official KCNA news agency condemned Tokyo as a
“political dwarf”, adding that Pyongyang was “keenly watching Japan adding
more crimes to the past ones and will have Japan pay dearly for them”. 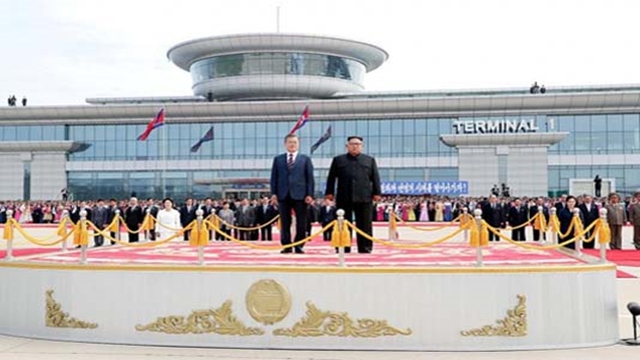 In their constitutions both North and South Korea claim sovereignty over
the whole of the peninsula.

Relations between them are handled by Seoul’s unification ministry and
Pyongyang’s Committee for the Peaceful Reunification of the Country, rather
than their foreign ministries.

As such, a journey between them would not be regarded as an international
flight.

And when Kim stepped onto the tarmac to welcome Moon, he emerged from a
door marked “Domestic departure”.

Kim and Moon got into separate vehicles at Pyongyang airport before
driving away.

But by the time the convoy arrived at the Paekhwawon State Guesthouse
where Moon and his closest advisers are staying — the name means “100
different flowers bloom” — they were in the same open-topped car.

Seoul officials explained that they had paraded together past crowds of
well-wishers lining the streets along the way.