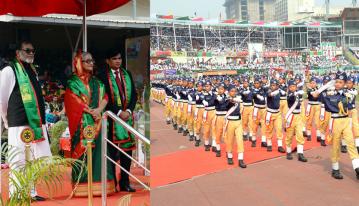 Prime Minister Sheikh Hasina on Monday urged the children and juveniles to nourish the spirit of patriotism and prides of a victorious nation to consolidate the country's dignity in the world in future.

"You have to always keep it in mind that you are the descendants of a victorious nation..... so you have to love the country deeply to take it forward from the phase where we are leaving it today," she said.

The prime minister was addressing the Independence and National Day-2018 rally of children and juveniles at Bangabandhu National Stadium in the capital.

Wishing a bright and prosperous future of the children, the prime minister said, "We want the children to build them as real human being and leaders of the future as they would steer the country at different levels in the coming days".

Sheikh Hasina reiterated her calls to parents and guardians as well as teachers and priests to remain careful in keeping the children out of the influences of militancy, terrorism and drug addiction.

"Children must pursue their studies attentively to build them as worthy citizens and each and every parents and guardian must make the stride," she said.

She also urged the children to obey the directives of the parents, guardians and teachers to build them as real human being and brighten the image of the parents.

Minister for Liberation War Affairs AKM Mozammel Haq was present on the occasion held under the auspices of Dhaka district administration.

The prime minister distributed prizes among the winners of nationwide school competitions on singing the national anthem in the correct melody and rhymes.

The prime minister said the goal of independence was to make Bangladesh as a developed and prosperous country. Father of the Nation Bangabandhu Sheikh Mujibur Rahman has given us the independence, and it's our duty to materialize the goal and ensure Bangladesh's position in the world.

Pointing out the graduation of Bangladesh to be a developing nation from LDC, the prime minister said, "We will not live seeking alms or bowing head to others..... We will live with dignity as a victorious nation."

The prime minister expressed her firm conviction that Bangladesh will celebrate the birth centenary of Father of the Nation Bangabandhu Sheikh Mujibur Rahman in 2020 and golden jubilee of independence in 2021 as a hunger and poverty free nation.

"And Bangladesh would be a developed and prosperous country in South Asia by 2041," she said seeking cooperation of the people of every section in this regard.

Sheikh Hasina said Bangladesh was born as an independent and sovereign state through long 23 years struggle and nine months bloody war. As an independent nation we have to secure our position in the world community, she added.

The prime minister said Bangladesh was liberated to get rid of poverty and give the people a decent life.

Bangladesh became a least developed country within three and a half years under the leadership of Bangabandhu. But, it was a misfortune for us that Father of the Nation was brutally killed along with most of his family members on August 15, 1975, she said.

"My sister and I could escape the carnage as we were staying abroad at that time and we had to live abroad as refugee for six years," she added.

Sheikh Hasina said since her return to home in 1981 as Awami League president she has been making constant stride to materialize the dream of independence and build a prosperous Bangladesh for the posterity.

She said her government has accomplished many tasks in five years for country's development after coming to power in 1996. After formation of the government in 2009 for the second time, she said, her party declared charter of changes to build a digital Bangladesh free from hunger and poverty.

The prime minister said the government is constructing schools for students all over the country and classrooms are being refurbished with multimedia to facilitate the students to get modern education.

Sheikh Hasina paid glowing tributes to Bangabandhu, four national leaders, martyrs of War of Liberation, all Freedom Fighters and the mothers and sisters who had lost their chastity and suffered immense torture in the hands of the occupation forces during the war time.

On the occasion, the galleries of Bangabandhu National Stadium was tastefully decorated with portraits of Father of the Nation Bangabandhu Sheikh Mujibur Rahman, four national leaders, Bir Shresthas, photographs of the prime minister and natural beauties of Bangladesh.

The prime minister witnessed the march past of smartly turned out units of school students and took salute. She also enjoyed attractive display of the school students on different themes of the War of Liberation.