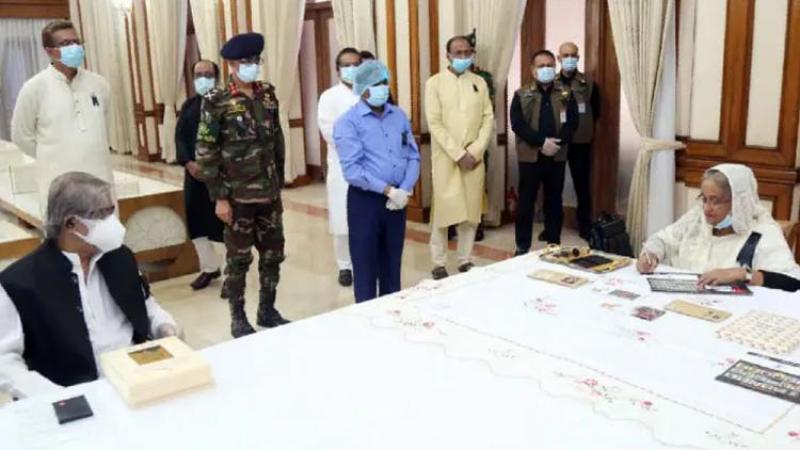 Postal department DG Sudhangshu Shekhar Bhadra (in blue shirt) is seen during an event with Prime Minister Sheikh Hasina at her official residence Ganabhaban on August 14, 2020 after he was tested positive with Covid-19

A legal notice has been sent to the government to dismiss Sudhangshu Shekhar Bhadra from the post of the director general of the country’s postal department, as he met Prime Minister Sheikh Hasina despite testing positive for Covid-19.

The notice was sent by email to the chief secretary to the Prime Minister's Office, secretaries to the Home Affairs Ministry, Public Administration Ministry, Health Ministry, the director general of the health department, and the director of the Institute of Epidemiology Disease Control and Research.

The notice also requested the authorities concerned to form a probe committee to investigate the incident.

According to the notice, Bhadra went to Ganabhaban on August 14 to inaugurate a special commemorative stamp and data card on the occasion of the 45th death anniversary of Bangabandhu Sheikh Mujibur Rahman. He went very close to the prime minister there.

Under Section 26 of the Communicable Diseases (Prevention, Control, and Eradication) Act 2018, what he did was a crime, and according to that law he had concealed this information which is a punishable offense.

The notice also said: “IEDCR collected Bhadra’s samples on August 12 to check if he had contracted coronavirus or not, which was reported by several newspapers.

According to the report he received on August 13, he was Covid-19 positive.

It is in the interest of the nation to clarify for what purpose he went to meet the prime minister, the notice said, adding that the effectiveness of the prime minister's personal security system has also been called into question due to this incident.

Mentioning these issues, the notice requested the formation of an inquiry committee to investigate the matter and bring Bhadra under trial in accordance with the 2018 law, and give appropriate punishment.

At the same time, during the investigation, the notice asked Bhadra to be suspended from his post. In addition, a request was made to address the shortcomings in the security of the prime minister.