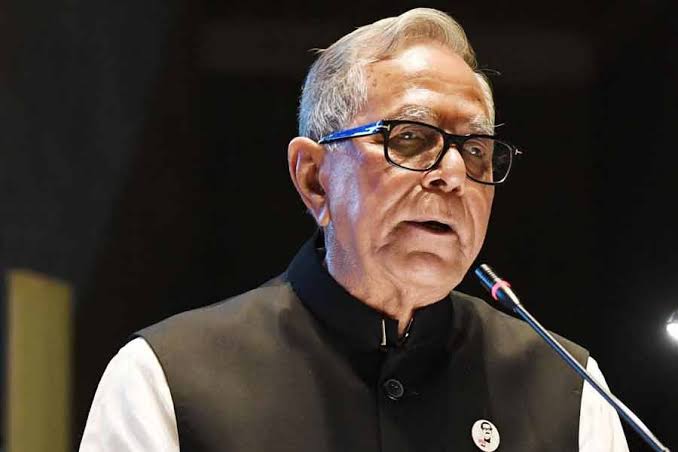 President Abdul Hamid on Monday recalled Bangabandhu Sheikh Mujibur Rahman’s days in parliament saying Bangabandhu was at the centre of his interest.

Abdul Hamid was the youngest and newest member in that parliament.

“It was a matter of great interest and attraction for me to participate in the sessions of the Constituent Assembly as its youngest and newest member. The parliamentarian Bangabandhu was then at the centre of my interest,” he recalled while delivering his address in a historic special session of parliament.

“As an utterly new member, I used to observe with great enthusiasm the performances of the senior and experienced members,” he said.

Reminiscing about Bangabandhu’s efforts in making parliament effective after the country’s independence, he said a constituent assembly was formed to frame the constitution immediately after Bangabandhu’s return to Bangladesh after his release from a Pakistani prison.

“The first session of the constituent assembly was held on Apr 10, 1972. The members of the national and provincial assemblies of Pakistan who were elected through the general election of 1970 took oath as the members of this assembly,” he said.

At the start of the assembly's session on the first day, Bangabandhu proposed the name of veteran leader Moulana Abdur Rashid Tarkabagish as its chairperson, Hamid recalled.

The main responsibility of the constituent assembly was framing of a constitution for the country.

Bangabandhu used to attach the highest priority to the proceedings of the constituent assembly, he said.

“The parliamentary sessions were quite lively. The arguments, debates and presentations of views were very attractive.”

“I clearly remember the member of Constituent Assembly Suranjit Sengupta, who was elected from NAP. He always got the opportunity whenever he wanted to speak. Even when the Speaker did not want to give him the microphone, Bangabandhu used to say, ‘Give him a chance, the opposition views should be heard first,’” Hamid said.

Bangabandhu also used to attach importance to the opinions of opposition members in all the proceedings of parliament.

The Awami League Parliamentary Party has not finalised everything – whatever is said by one or two independent or opposition members, I do not have any objection; if you propose good amendments, we shall accept those by assuming that they are surely for the good of the country,” Hamid quoted Bangabandhu as speaking on the draft Rules of Procedure.

The president praised parliament for convening the special session in the midst of the pandemic situation.

“I hope the proceedings of this session will play a positive role in informing the present and future generations about Bangabandhu’s life and works,” he said.

Hamid said a complete discussion on Bangabandhu can never be possible within a limited time and space.

“The extent of his life and work is so vast that even discussion of hours or even days together will leave it inadequately described,” he said.

Immediately after his homecoming, Bangabandhu started working for the reconstruction of the war-ravaged country and its economy. He adopted sector-based development plans for agriculture, industry, culture, health, tourism, defence, communication and other sectors.

Bangabandhu also ensured equality of men and women in the constitution and provided assurance for their equal participation at all strata of the state and public life. He took initiatives to enhance diplomatic contacts in order to consolidate Bangladesh’s position in the international arena.

“Bangabandhu’s dream was a prosperous Bangladesh free from poverty and hunger, without corruption and exploitation. The philosophy of the Father of the Nation was ‘the freedom of the people of Bengal’. It was the economic, political and social freedom,” the president said.

“He had formulated future plans for the development of the social, cultural and economic infrastructure with a view to ameliorating the fate of the farmers and the working people. Based upon the planned development, Bangabandhu designed the framework of a modern state, which was reflected in the first Five Year Plan (1973-78) of the country,” he said.