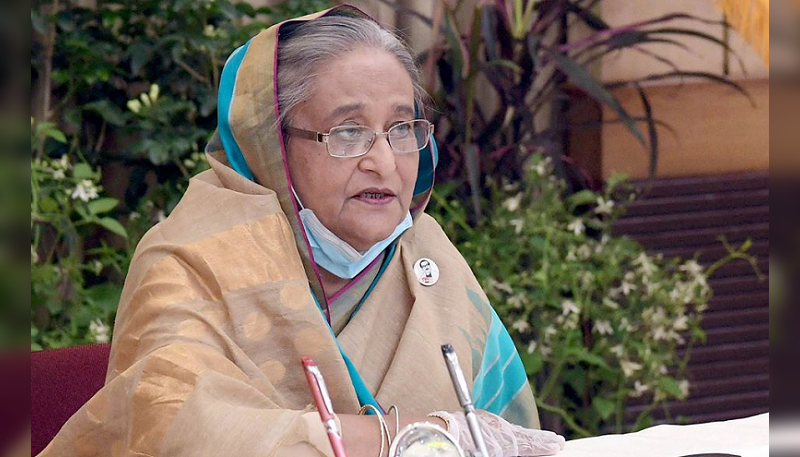 Prime Minister Sheikh Hasina has stressed the need for taking urgent steps collectively to address the Covid-19 challenges and its impact on public health and nutrition.

“The ongoing Covid-19 pandemic has created a significant setback in our nutrition initiatives. Urgent actions and united efforts are needed to address the challenges of Covid-19,” she said on Tuesday.

The prime minister said this while addressing the Nutrition for Growth Summit (N4G), Japan virtually.

Japanese Prime Minister Kishoda Fumio also spoke at the summit, which comes with the theme “Food, Health and Prosperity for All.”

Sheikh Hasina placed five proposals before the world for ensuring healthy and nutritious diets for this growing population.

The international community needs to work together to address the challenges of Covid-19, including its impact on nutrition programs, the PM said in her first proposal.

In her third proposal, the prime minister said for building food banks at regional and global levels to stay safe and secure during disasters.

In her fourth proposal, she stressed the importance of exchange of best practices and expertise for increasing nutrient contents in food.

Finally, she asked the developed nations to disburse the committed climate adaptation fund to adapt to the climate-led extreme events that hamper food production in the developing world.

Sheikh Hasina said ensuring nutrition for all citizens is a daunting task. But, she said, investment in nutrition security generates high socio-economic returns leading the way to sustainable growth and development.

Talking about Bangladesh, the prime minister said the country has made immense achievements and substantial progress in the economy, food security, health and nutrition during the last one decade.

“We’ve taken a slew of initiatives to enhance the nutritional status of disadvantaged people,” she said.

In this regard, the prime minister mentioned that allowances have been introduced for vulnerable groups under social safety-net programmes. Insolvent pregnant and lactating mothers were given cash allowances.

She also said midday meals were introduced for school students.

Sheikh Hasina said the poverty rate in Bangladesh came down to 20.5 per cent from 31.5 per cent during the past one decade. The country is on track for achieving its child nutrition status as malnutrition rates have also declined, she added.

The premier said stunting of children decreased from 43 per cent in 2007 to 31 per cent in 2017 which is now below WHO critical threshold. Overweight among under-5 children is 2.4 per cent whereas regional rate is 5 per cent and global 6 per cent, she added.

“We aim to strengthen our commitments made at earlier nutrition Summits to achieve the SDGs and improve nutrition outcomes in line with our Five-Year Plan,” she added.

The prime minister pledged to address the double burden of malnutrition through 12 commitments which are aligning with SDGs.

“These will be achieved through a multi-sectoral approach, leveraging both domestic and development finances,” she added.

The N4G Summit is being held in Tokyo under the auspices of the Japanese government. The summit is bringing together stakeholders across sectors to generate financial and political commitments to nutrition, focusing on the critical roles of food, health and social protection systems in delivering good nutrition for all.

The summit comes at a critical time, midway through the United Nations (UN) Decade of Action on Nutrition, with only five years left to achieve the World Health Assembly (WHA) targets on maternal, infant and young child nutrition, and 10 years to reach the SDGs.