Padma Bridge is a symbol of nation's pride and ability, says PM Hasina 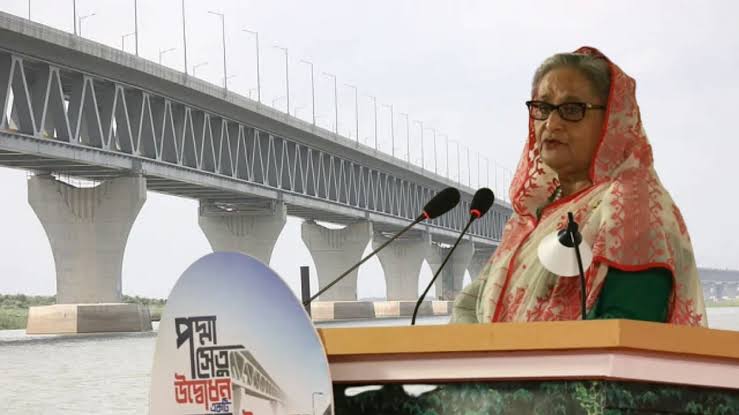 The Padma Bridge is not a pile of brick and cement but a symbol of the nation’s pride, honour and ability, said Prime Minister Sheikh Hasina.

“The bridge belongs to the people of Bangladesh. It encapsulates our passion, creativity, courage, endurance and perseverance,” she said during the inauguration ceremony of the long-awaited Padma Bridge, the longest in Bangladesh.

The construction of the bridge had been set back by various plots and conspiracies, but eventually, all hurdles were surmounted, the prime minister said.

But the bridge would not be standing tall without the courage and support of the people according to Hasina.

Looking back on the arduous road to the realisation of a 'dream', Hasina noted the World Bank was supposed to finance part of the construction of the Padma Bridge. But the project was thrown into uncertainty when the global lender pulled out in 2012 after raising complaints of corruption over the appointment of consultants for the bridge.

“The Anti-Corruption Commission investigated the allegations and found that no corruption had taken place," said Hasina.

"But when a Canadian court in its verdict said there was no corruption, everyone fell silent.”

After the World Bank withdrew its support as a lender, Hasina famously announced that the bridge would be constructed with Bangladesh’s own funds.

“After this announcement, the ordinary people stood by us. We went ahead with the strength they gave us."

She thanked people on both banks of the mighty river who gave up their land and homes to facilitate the construction of the bridge.

"Some people said we would always be beholden to others but Father of the National Bangabandhu Sheikh Mujibur Rahman also stressed the importance of self-respect. Many people made contributions with whatever means they had - the bridge was financed by the people after all."

Hasina also thanked the late Prof Jamilur Reza Choudhury, who led the panel of experts for the project, along with the various international organisations for remaining headstrong in the face of multiple challenges.

The Awami League chief noted the project was stopped in its tracks after the BNP-Jamaat alliance formed a government in 2001.

After sweeping the 2008 general election, the Awami League government set about pursuing the construction of the Padma Bridge as a top priority.

The prime minister emphasised that no compromises were made in terms of quality and standard of the construction work.

After the Amazon River, the Padma is the most treacherous and unpredictable river in the world, Hasina noted. But the bridge was built using the best technology, with steel piles being driven 122 metres deep into the river bed.

Once the bridge opens, it will establish direct connectivity between Dhaka and 21 disadvantaged southwestern regions of the country by road and rail, Hasina said.

This will end the long-standing sufferings of the people of the region on the one hand, and accelerate the economy on the other. Their businesses will expand and their standard of living will improve. The bridge is expected to contribute 1.23 per cent to GDP growth and reduce poverty by 0.84 per cent per year.

The prime minister offered her sympathies to her family members and others including Economic Adviser Dr Moshiur Rahman, former Communications Minister Syed Abul Hossain and Communications Secretary Mosharraf Hossain Bhuiyan who suffered ‘extreme mental agonies because of the conspiracies orchestrated by certain quarters at the planning stage’ of the mega project.

Hasina also addressed the various concerns raised about the fate of the economy in light of the decision to build the bridge with the country's own resources.

“On this day of joy, there is no hatred, no animosity towards anyone. I would like to express my deepest gratitude to the people of the country. Those who said it would not be possible, I have nothing against them. Many predicted that the economy would collapse if the bridge was built with our own funds," she said.

“Today, the Padma Bridge has been built. Bangladesh's economy has not collapsed. We have faced the coronavirus pandemic and after that, the war in Ukraine, but the economy is still moving forward. To the people of Bangladesh, I salute you."

Hasina opened the bridge by paying the toll.

The prime minister boarded a helicopter at the old airport in Dhaka’s Tejgaon at 9:30 am and arrived at the inauguration stage at 10 am.

Nearly 3,000 invited guests, including foreign diplomats, ministers and senior Awami League leaders joined Hasina in celebrating the inauguration of the government-funded bridge at the venue.

The bridge will open to traffic on Sunday.

Both sides of the bridge and surrounding areas and roads were decorated with colourful festoons and banners highlighting Father of the Nation Bangabandhu Sheikh Mujibur Rahman, and Prime Minister Sheikh Hasina ahead of the inauguration.

The World Bank was supposed to finance part of the construction of the Padma Bridge. A decade ago, Bangladesh finalised a $1.2 billion loan contract for the project at an initial estimated cost of $2.9 billion. But the Washington-based agency suspended its loan after raising complaints of corruption over the appointment of consultants for the bridge.

Uncertainty loomed over the project after the World Bank pulled out in 2012. Later, the Bangladesh government, which repeatedly denied the allegations, went ahead with its self-funded plan for the bridge.

A decade later, the bridge opened on Saturday, connecting people on both sides of the Padma River.