People will decide who will form next govt: PM 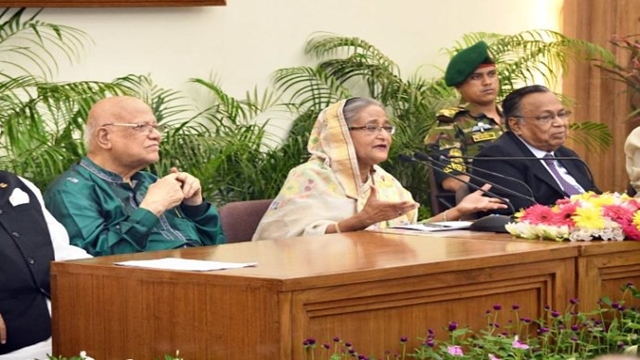 Prime Minister Sheikh Hasina on Wednesday said the people are to decide who would form the next government in Bangladesh while it was the matter of one particular party that whether it would contest the elections.

"The issue of election is democracy . . . it is the own decision of a party if it will take part or not," she told a crowded press conference at Ganabhaban in the capital yesterday afternoon in an apparent reference to BNP.

She added: "I cannot interfere in any party's (internal) decision (and) I cannot say anyone I will take you to the jail, if you skip the polls . . . so it fully depends on them."

The prime minister's comments came while responding to a question that whether the government would take any initiative to bring the BNP in the coming election while the briefing was convened to inform the newsmen about the outcome of her just concluded tri-nation visit.

The prime minister however, recalled that BNP did not contest the 2014 elections and tried to resist the polls through destructive means and "killed over 3000 people including 27 policemen, torched 582 schools and 70 offices and chopped trees and cut down roads".

Sheikh Hasina, also the Awami League chief, on the other hand, said the reelection of her party to power was, however, dependent on people's will but said, "if the people think the development spree should continue and they won't like to see the destruction similar to 2001, they will surely vote in favour of Awami League this time as well".

About the BNP's demand for release of imprisoned BNP chief Khaleda Zia, the premier said it was not she who sent Khaleda Zia to jail.

"The court gave its verdict. So it will yield no result if they make the demand to me (for Khaleda's release) . . . she landed in jail in the course of law and they (BNP) have to pursue the legal procedure to get her freed from the prison," she said.

She, however, referred to the failure of the high-profile lawyers belonging to BNP in proving Khaleda's innocence in regard to the charges of embezzlement of Zia Orphanage Trust money.

About the quota reform in the government jobs, the premier said she accepted the demand as the students did not want the system and "it is not a matter of grievance".

"Now what is the necessity to discuss the issue again," she said but regretted that she did not see anybody to raise their voice about the non- student elements that turned the campaign violent mixing with students.

The premier said after the independence, Bangabandhu had introduced the quota system in all spheres to give scope to those lagged behind in society and "it was a realistic decision".

But, she said, students recently launched a sudden campaign demanding its reform by "enforcing blockades, creating severe jam in the already traffic clogged city (and) such a situation was created that the patients could not go to hospitals".

The premier said the government tried to convince the students though "it was not the matter of students, it's a government policymaking issue".

Sheikh Hasina said the government provided the education and related costs in public universities despite their autonomy.

The prime minister said after Bangabandhu's 1975 assassination, the freedom fighter officers could not identify them as freedom fighters as it was virtually regarded as a crime.

"We later introduced quota for the grandchildren of the freedom fighters as the age of their children also exceeded for the government jobs," the premier said.

But the quota reformists, she said, started dishonouring and even ridiculing the freedom fighters but "I am the last person to tolerate their dishonour".

On a question on approval of two more private universities and standard of education and tuition fee there, the premier emphasized on strengthening the University Grants Commission (UGC) capacity to regulate them.

Replying to a question about BNP acting chairman Tarique Rahman's extradition from London, Sheikh Hasina said that her government would certainly try to bring him back to be exposed to justice.

The premier said that Tarique was convicted in two cases and some others were pending in the courts as well and referred to the ten trucks arms haul case, money laundering cases, various types of criminal activities like arson attacks and murders.

Sheikh Hasina simultaneously criticised BNP for their political bankruptcy to install a criminal like Tarique Rahman as their acting chairman who already surrendered his Bangladeshi passport to the British government seeking political asylum.

"Don't they have any other capable leader for the particular post," she questioned.

Talking about the economical pressure on Bangladesh due to the over one million Myanmar Rohingyas living in Bangladesh, the prime minister admitted that there will be pressure.

"For that we have taken Tk 2500 crore project, we have already started the work, we are getting support and cooperation from all, that's why there will be no big problem for us," she said.

In this connection, she said that the people of Bangladesh are well-known for their hospitality and humanity.

"I don't think that we have to face huge pressure for the matter," she added.

The Prime Minister, however, admitted that as this issue is now at the beginning and for that reason, all are coming with their assistance.

"It will be deemed down in the course of time, the pressure will be mounted on us, for that situation we are taking preparation gradually," she said.

She also said that the ultimate target of the government is to repatriate the Rohingyas to their homeland, Myanmar, as quick as possible.

Regarding the recent visit of the UNSC team in Bangladesh, the premier said that they are very much positive about the Rohingyas and their repatriation.

She also said that some permanent members of the UNSC also expressed their willingness to construct homes for the Rohingyas after their repatriation in Myanmar.

The prime minister also urged the people to abide by traffic rules properly to avoid accidents and requested TV channels and other media to create mass awareness about the issue.

"We always want that a capable leadership is created in the Chhatra League and for this there is a system to select its leaders," she said.

The Awami League chief said efforts for consensus are made to select the leadership among the aspiring candidates. "If the move fails, then voting takes place through transparent ballot box," she said.

Sheikh Hasina, however, said it will have to be kept in mind that wrong leadership is not elected by the polls. "We'll see that whether capable leadership comes up through the conference," she said.