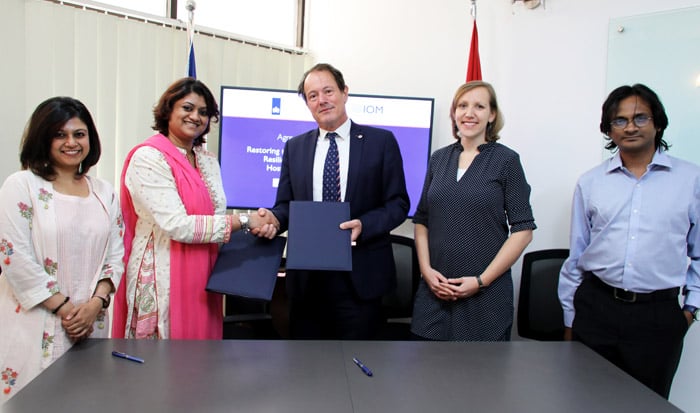 The Netherlands has decided to provide $7.5 million dollars through the International Organization for Migration (IOM) for the welfare of forcibly displaced Rohingyas and their host community in Cox's Bazar district.

An agreement between the Netherlands embassy in Dhaka and IOM was signed in this regard to implement a project styled 'Restoring the Environment and Strengthening Resilience of Rohingya Refugees and Host Communities in Cox's Bazar'.

The project aims to provide multi-sectoral support assistance for the Rohingya refugees and the host communities in Cox's Bazar, said a press release.

Deputy Ambassador of the Netherlands to Bangladesh Charg, d'Affaires Thijs Woudstra, and Officer in Charge of IOM Bangladesh Fathima Nusrath Ghazzali inked the deal on behalf of their respective sides at the IOM office here.

Cox's Bazar district, which has been hosting over one million Rohingya refugees since 2017, is prone to natural disasters and climate change impacts where Rohingyas and host communities are vulnerable to landslides and floods, particularly during cyclones.

With support from the Netherlands, she said that IOM would provide life-saving support to Rohingyas and host communities, contributing to better social harmony and security.

Woudstra expressed hope that his government's support would help to improve the living conditions of both Rohingyas and Bangladeshi communities and mitigate disaster risks.

The project will be implemented in coordination with the Bangladesh government and other stakeholders, added the release.