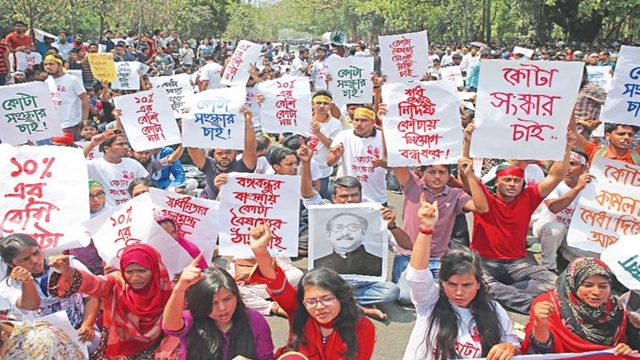 The first meeting of the seven-member committee formed to review the existing quota system in public service was held at the secretariat in the city on Sunday.

Cabinet Secretary Mohammad Shafiul Alam presided over the meeting with the presence of all members, Public Administration Ministry's Joint Secretary Abul Kashem Md Mohiuddin, spokesperson of the committee, told reporters after the meeting.

While briefing, the spokesperson said the committee decided to gather all the previous reports published in different newspapers, different organisations and institutions and public service commission on the issue.

Then, the second meeting will be held after gathering all the information and reports related to quota, said the official.

Abul Kashem Md Mohiuddin also mentioned that the committee is working to submit its report within the given 15 working days.

Earlier on July 2, the Public Administration Ministry formed the committee to review/reform/revoke the existing quota system in government jobs.

The committee has been asked to submit its report within 15 working days.

In April, students of public and private universities across the country waged a strong movement demanding reform in the quota system.

In the face of the movement, Prime Minister Sheikh Hasina announced in parliament on April 11 the abolition of all types of quotas in public jobs.

As no gazette notification has so far been issued regarding the abolishment of the quota system as per the PM’s declaration, the leaders of the council gathered in front DU central library on Saturday to hold a pre-scheduled press conference to announce their fresh programme.

But, Bangladesh Chhatra League activists reportedly carried out separate attacks on the protesters and general students that triggered protests at different universities across the country.