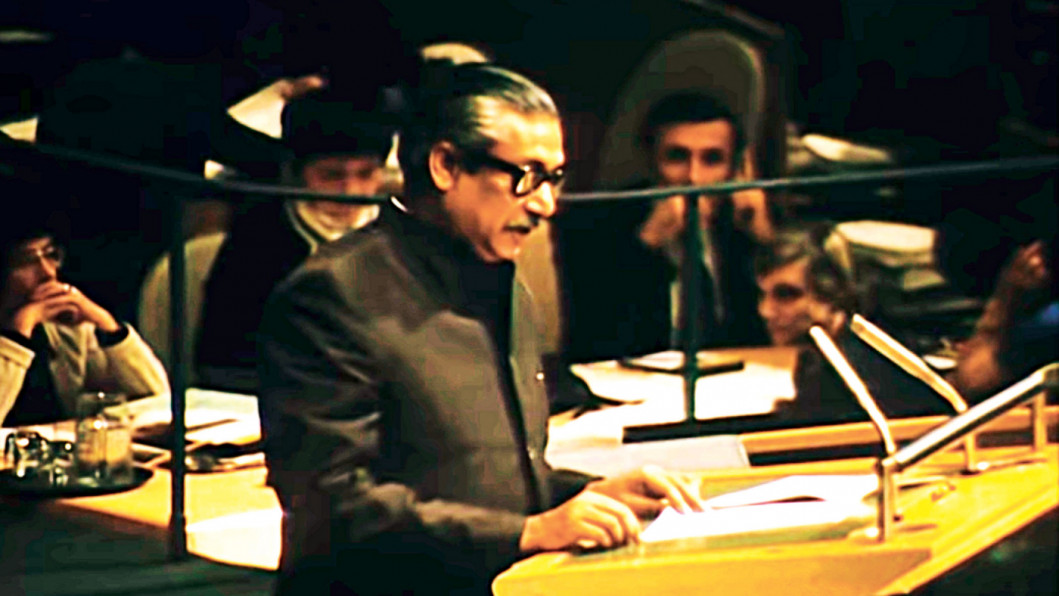 Bangladesh visibly pursues a distinct strategy for striking balances among global and regional powers under a guiding principle set by Father of the Nation Bangabandhu Sheikh Mujibur Rahman with his foresight as a statesman, said policymakers and analysts.

They said Bangabandhu adopted the “non-alignment” policy for newborn Bangladesh in early 1970s amid the peak of the cold war in a politically bipolar world, but it remained valid and crucial until today despite a changed global scenario.

In a recent conversation with a BSS journalist the then foreign minister in Bangabandhu cabinet Dr Kamal Hossain said the country’s founding father wanted to avoid getting drawn into global or regional power competitions.

Simultaneously, he said, Bangabandhu, sought good relations with all major powers while his goal was to ensure peace and stability in South Asia, a strategy which the incumbent foreign minister Dr AK Abdul Momen called a “magic” policy that demonstrates his “inherent quality”.

“We are still following and maintaining it . . , her daughter (Prime Minister Sheikh Hasina) is also following him with her own prudence -- balancing everything successfully,” said Momen in an interview with BSS coinciding with the Month of Mourning.

Momen said Dhaka’s good relation with India and China was one of the examples of that policy while the two neighbours in close proximity continued making visible their stronger presence in the global economy and political landscape with different standpoints.

The minister, an economist and practising diplomat by background, said Bangladesh emerged as an independent nation when the world was sharply divided into western and Soviet bloc and the division had an impact on the Liberation War as well.

Under a general presumption, Bangladesh was supposed to join the then Soviet Union-led bloc for Moscow’s support during the Liberation War, but Bangabandhu preferred to be part of the “non-align” platform or the Non-Align Movement (NAM).

Momen said Bangabandhu subsequently attended NAM and OIC conferences to present to the international arena that Bangladesh is a sovereign and independent country with a vision of peace, fully taking into account the international diplomatic realities and gauging what was needed for Bangladesh.

He said Bangabandhu demonstrated his high astute in negotiation with closest neighbor and 1971 ally India on different issues including land boundary, water sharing and friendship treaty.

Immediately on his return home from Pakistani captivity on January 10, 1972, Momen pointed out, Bangabandhu requested the then Indian prime minister Indira Gandhi to take back their troops from Bangladesh at the fastest possible time.

“Bangabandhu did that to show the entire world that Bangladesh is a sovereign and independent country.”

Just after independence, the Soviet Union expressed its readiness to send its naval de-mining units to clear the Chittagong and Chalna ports to make these two crucial facilities for normal maritime operations, free of cost.

Being led by his foresight in that cold war era, Bangabandhu had decided to split the salvage work - Russia was assigned to clear the Chittagong port while the United Nations was asked to do the same in Chalna port.

He said being the foreign minister, he has given emphasis on economic diplomacy that was also derived from Bangabandhu’s foreign policy and economic outlook and “basically . . . we are following what he wanted to do”.

Kamal Hossain, who served as the foreign minister from March 1973 to August 1975, said Bangabandhu was very practical in dealing with foreign countries to protect Bangladesh interests even in the case of India, which extended its crucial support to Bangladesh’s 1971 independence.

He said in the history of specific negotiation with India between 1971 and 1975, Bangladesh maintained, in every case, that any concession to be made should be by the larger neighbour.

“No one was more aware of the need to ensure that Bangladesh’s interests were duly taken into account than Bangabandhu Sheikh Mujibur Rahman,” wrote Hossain in his “Bangladesh: Quest for Freedom and Justice”.

Former foreign secretary Fakhruddin Ahmed gave identical accounts in his write-ups as a witness of negotiation meetings between Bangladesh and India regarding land boundary agreement.

“Bangabandhu told the Indian delegation, which included Mrs. Gandhi, India was a big country and it would hardly matter if India would concede some territory to Bangladesh here or there,” Ahmed wrote recalling that this extraordinary comment stunned the entire delegation.

The former top foreign office bureaucrat said before agreeing to put his signature on the boundary agreement “Bangabandhu repeatedly asked that “We must be absolutely sure that there was no prospect of gas or oil in the sectors we had agreed to demarcate”.

In regard to interactions with another major 1971 ally Soviet Union, Kamal Hossain said, Bangabandhu decided to make his first visit beyond the region to Moscow in 1972, but made it clear that Bangladesh favoured developing its relations with other Asian countries on a bilateral basis, and not within a multi-lateral framework.

The former foreign minister said when Bangabandhu went to the United States in 1974 to attend the UN general assembly there was a proposition that he should visit New York to attend the summit and fly back, without going to Washington to meet with the then US President Gerald R. Ford.

“The invitation did, however, come and Bangabandhu decided to accept. He felt that a refusal by him would be misconstrued to malign Bangladesh by suggesting that it was under Soviet and Indian influence,” Hossain wrote.

Bangabandhu had also commenced trade with China to made progress toward establishing normal bilateral relations with Beijing.

Hossain said all of Bangabandhu steps were meant to pursue a policy of non-alignment, seek good relations with all the major powers and avoid getting Bangladesh involved into global or regional power competitions.

“The goal was peace and stability in South Asia . . . This was in 1972, and remains even today, the most sensible set of objectives to guide the mutual relations of the states of South Asia,” Hossain wrote in his book.