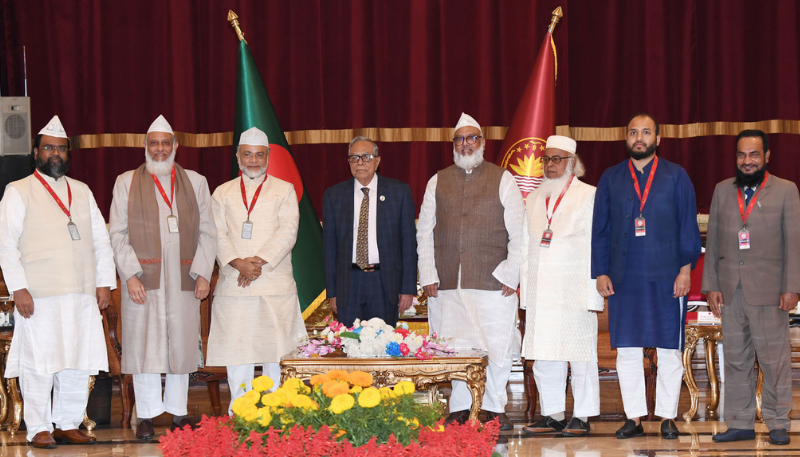 The Bangladesh Tariqat Federation on Monday placed a four-point proposal to form an acceptable Election Commission without the inclusion of anyone who or his family opposed the 1971 Liberation War.

The party gave the proposal during a dialogue with President Md Abdul Hamid at Bangabhaban in Dhaka.

A seven-member BTF delegation held talks with the president for about an hour starting at 4:00 pm.

After the dialogue, President's Press Secretary Md Joynal Abedin told BSS that Tariqat Federation's delegation, led by its Chairman Syed Najibul Bashar Maizbhandari, placed a four-point proposal to the president for the formation of an independent, effective and acceptable commission.

The BTF stressed the enactment of a specific, permanent and time-befitting law to constitute the Election Commission.

They also gave positive opinion on the formation of a search committee, by holding a dialogue with civil society representatives in addition to political parties to make the issue universally acceptable and beyond debate.

Maizbhandari further said the proposed search committee should include representation of civil society, including a representative of the media personality also.

Welcoming the BTF leaders in the talks at Bangabhaban, the president said the formation of an Election Commission is a constitutional obligation and "the prime object of the dialogue is only to form an acceptable Election Commission," the press secretary said.

It would be possible to form an efficient, strong and acceptable EC through holding effective discussions with the political parties in phases, he added.

The head of the state sought the full cooperation of all political parties in the EC formation process.

Earlier on December 20, President Abdul Hamid held talks with the Jatiya Party, the main opposition party in the parliament.

He has discussed with six political parties so far over the EC formation.

The president will hold a dialogue with Workers Party of Bangladesh (WPB) on Tuesday at 4:00 pm.

Besides, talks with Bangladesh Nationalist Front (BNF) and Islamic Oikya Jote will be held at 4:00 pm and at 6:00 pm respectively on Wednesday.

However, no date has been set for talks with other political parties.

Earlier, a series of dialogues were held with the participation of political parties ahead of the ninth, 10th and 11th parliamentary polls.

In the last few terms, the president formed the Election Commission on the basis of the recommendations of the search committee.

The current EC's five-year term will expire on February 14 next year.

The president will form a new commission, under which the 12th parliamentary elections will be held.